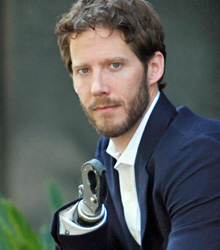 Growing up in Ohio and Indiana before moving to Colorado with his family, Aron Ralston had little exposure to the wild outdoors.  But by the time he hiked into a remote area of Utah's canyon country in April of 2003, he was an experienced outdoorsman out for a walk in the park. Seven miles into the canyon that day, Aron accidentally dislodged a boulder that crushed and pinned his right hand. Within an hour of being trapped by a boulder in an isolated canyon miles from civilisation, Aron began to contemplate the unthinkable...

At some point, he reasoned, he would have to cut off his own right arm in order to get free and have any chance of survival. It says an awful lot about this remarkable man that not only did he do just that, but also that he can actually re-count his horrific, five-day ordeal with humour, honesty and insight.

Aron Ralston's harrowing ordeal, and his extraordinary, inspiring desire to survive it no matter what it took, is vividly captured in Danny Boyle's remarkable film, ‘127 Hours'. When Aron set out for a weekend of hiking in the beautiful, lonely canyons of Utah on a Friday night back in 2003 he made a classic mistake - he didn't tell anyone where he was going.

The 27 year old adventurer was climbing a rock face when he slipped and fell deep into Blue John Canyon. A falling boulder tumbled down on top of him and wedged his right hand against the sandstone rock face. He was trapped and he knew that nobody would be coming to rescue him.

And even though the terrifying thought that he would have to amputate his own arm was always in the back of his mind, he tried every option to free himself. “I went through all the options of trying to lift the boulder, chipping away at the rock with my penknife to try and extricate my hand,” he recalls. “I thought about waiting for someone to come and rescue me and then understanding that nobody was coming because I didn't tell anyone where I was going. And then it was like, ‘I'm going to die here...' By the third day it was ‘screw it, I'm going to try to get out of here anyway I can.'”

When the accident happened Aron Ralston had limited supplies - a bottle of water, some energy bars - and very little equipment to work with: a flashlight, a penknife (with a dull blade) and a rope. He also had a video camera on which he recorded poignant farewell messages to his loved ones.

The video provided a vital link to the outside world, and helped him feel connected to his family. “There were basically two chains of thought,” he explains. “One was about how I was going to get free, and potentially rescue myself and survive the situation, so there was a lot of tactical and logistical kinds of issues. And then there was this emotional side of things that was about connecting with my family through the camcorder.

When tragic events strike, Aron says, “we have a choice - are these traumas going to be a tragedy or are they going to be blessings? These boulders are going to come and they are going to be big. They have the power to teach us and to show what's extraordinary in us. See that in yourself.”

It was, of course, a life changing experience. Aron Ralston's memoir, ‘Between A Rock and A Hard Place', was published in 2004 and he is now a highly sought-after public speaker around the world.

Aron hopes his story will be inspirational for others and believes that cheating death in that lonely canyon gave him a new lease of life.

127 Hours: Between a Rock and a Hard Place There is no force more powerful than the will to live, explains Aron Ralston, who faced an unimaginable challenge with his life-or-death decision.

An ordinary man who was pushed to the extreme, he demonstrates the human capacity for the extraordinary, proving anyone can survive the most gruelling circumstances. A talented storyteller, Ralston recounts his ordeal, shedding new light on the meaning of sacrifice, and on what is truly important.

He takes you on a riveting journey in which courage, perseverance, and the human spirit will defy the inevitable outcome. As he says: "May your boulders be your blessings. May you be able to embrace them. And may you find what's extraordinary in yourself."

A genuine, humble and an amazing storyteller. Aron Ralston mesmerized our audience and inspired others to appreciate life to the fullest.

Aron Ralston's story was riveting. Very engaging presentation... a very intense and inspiring story. I would recommend him as a speaker.

Aron had the most remarkable impact of anyone we have ever brought to our annual sales meeting. The Best Motivational Speaker We've Ever Had!

I have heard many speeches in my life, and Aron Ralston's was the finest. Only Bono's speech at my own graduation ceremony from Penn comes even close.

Aron Ralston gave the best keynote speech I've ever heard. He really connected with our audience and his talk made for a special celebration of overcoming life's challenges.

Aron had the entire audience in awe….An amazing story of the human spirit.

I am a better man after listening to Aron Ralston, and I've found myself approaching challenges in a new way ever since.

I've been doing these types of meetings for 25 years, and Aron's presentation was hands-down the best I've ever seen!

Clients often ask about purchasing books for giveaways and delegate packs. Below you’ll find a selection of products by Aron Ralston. Click the images to view on Amazon's website. For bulk orders, please speak with your Booking Agent.

How to book Aron Ralston for your event