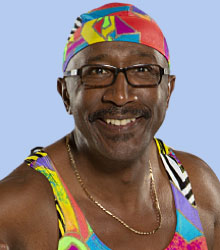 Anyone of a certain age will remember Derrick Evans — AKA Mr Motivator — and his cheery catch phrase “Say yeah!”, from his high-energy lycra-clad workouts on ‘90s breakfast show GMTV.

A beacon of positivity, the Jamaican-born fitness instructor has lived most of his life in the UK and rose to fame in the early 1990s, making appearances on the UK breakfast television show where he performed live fitness sessions.

After starting-out in the fitness industry as an instructor in north west London, Derrick moved into the space of providing one-to-one training for many celebrities. His big break came on the 23rd August 1993, when he was credited with turning around the ratings of ailing breakfast television show GMTV.

The name ‘Mr Motivator’ derived from street performances he, Richard Madeley and Judy Finnigan gave to crowds in shopping centres and other public areas — Finnigan commented that he was a motivator and the name stuck!

After approximately 10 years at GMTV, Derrick Evans resigned so that he could concentrate on developing the motivational speaking side of his abilities; providing talks and team building activities for many blue chip companies.

In 2009, Derrick returned to GMTV as Mr Motivator for a three-week-long special to spearhead a public health programme Change4Life. This led to him meeting the then Prime Minister, Gordon Brown, in promotion of the NHS campaign.

Mr Motivator first appeared on the festival circuit in 2010, performing at Bestival on the Isle of Wight as a special guest on the main stage. He performed a fitness routine while encouraging the crowd to join in and generally increase the amount of exercise they do and their enjoyment of doing it. He has made numerous appearances since, including Reading Festival and Truck Festival, at which he’s performed every year since 2016.

In 2016, he released his autobiography The Warm Up, which chronicled his story of growing up in Jamaica. And in 2020, he joined the BBC HealthCheck UK Live to "keep Britain fit in lockdown" during the COVID-19 pandemic, in line with the resurgence in home-based workout routines.

Providing mass workouts and his unique way of exercising for individuals, charities, schools and businesses has meant that Mr Motivator is continually in-demand and has led to numerous television, film and radio appearances.

Derrick Evans was appointed by HM The Queen, a Member of the Order of the British Empire (MBE) in the 2020 Birthday Honours for services to health and fitness.

Whether you need a warm-up for your corporate event, team-building for your company, or simply some motivation to keep everyone in high spirits, Mr Motivator has kept up the energy ever since his GMTV days, making appearances at festivals across the UK with his sunny outlook and communal exercise routines.

He’s also in popular demand for giving corporate motivational speeches about the importance of health, well-being and fitness. Corporate clients include Google, Cadbury’s, Allianz, Sales Force, the NHS and many others.

Since Covid-19, where in-person appearances have been thwarted, Mr Motivator has been in continual demand for virtual workout sessions via Zoom and similar online platforms – motivating and energising individuals, companies and groups the length and breadth of the UK.

Typically, Mr Motivator will open up his session with an 8-10 minute energiser getting the whole audience involved. This is not a work out – you do not need any sports equipment and your guests can be dressed in their regular clothes. He describes it more as movement to music, with laughter. And if anyone in the group has mobility issues, it can also be done sitting down. Mr Motivator will then deliver a 15-20 minute motivational talk. And if you have room in your schedule, he is always delighted to take part in a Q&A. So the overall session could be 40-45 minutes

The event was a real success; we have had fantastic feedback from across the organisation and I’d like to personally thank you for your part in that. During what is a very difficult time for people across our organisation, you lifted our spirits and left people feeling motivated and inspired - the number of individual positive messages about your session was tremendous. Thank you very much for all of your efforts and for playing such a big part in helping us deliver our first ever virtual event.

The session was absolutely brilliant, thank you for organising! We had fantastic feedback from the group, who all absolutely loved it – great way to start the day. Please do pass on our thanks to Mr Motivator, particularly for being so open and honest about his life and health, it was a really inspiring Q&A (as well as workout).

Events company on behalf of eBay

Mr Motivator and the NMP Live team were a joy to work with throughout the process of securing him, all the way to his live performance at Unilever’s biggest internal Sales employees’ event to a global audience of 3k colleagues from across the world. He was extremely adaptable and flexible in line with the changing demands of the Summit ... He did an excellent job in helping our Sales team to recharge and energise in the quick workout and inspired us to lead a healthier lifestyle. In addition to the workout, we also invited Mr Motivator to sit down for an interview in which he shared his personal journey of how he became a successful fitness coach. The feedback from the participants was amazing and they rated Mr Motivator 5*.

Clients often ask about purchasing books for giveaways and delegate packs. Below you’ll find a selection of products by Mr Motivator MBE. Click the images to view on Amazon's website. For bulk orders, please speak with your Booking Agent.

How to book Mr Motivator MBE for your event