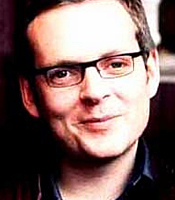 Jason Barlow was born in Northern Ireland in 1971. He read law at Manchester University before qualifying with a post-graduate diploma in periodical journalism from Cardiff University in 1993.

Jason presented Wrong Car, Right Car for BBC2 and presented BBC2's Top Gear from September 2000. In 2005 he presented a one hour documentary for BBC Northern Ireland on Paddy Hopkirk's journey in a Mini from Minsk to Monte Carlo. He was then seen on Sky One presenting Movies' Greatest Cars, and is currently filming The Making of Danny Boyle's 'Sunshine' for Sky Movies.

He began his journalism career as a sub-editor on Performance Car magazine, quickly graduated to the position of production editor, before taking up the same challenging position on Loaded, the infamous so-called 'lads' magazine and publishing phenomenon of the '90s. He escaped with his sanity still intact after 20 issues, before combining his love of writing with an enduring passion for cars to become assistant editor on the globally respected Car magazine. He has also written for The Independent, i-D magazine, 4 Car website, BBC Top Gear website and wrote a weekly column for the Telegraph and monthly columns for GQ and Top Gear magazine. He is currently editor of Car magazine.

In October 1998 he joined the Channel Four motoring programme Driven as a presenter, and continued working on it as both a presenter and as associate editor for another two series until March 2000.

He is passionate about Formula One motor racing, underground American music, Stanley Kubrick films, and reading anything he can get his hands on. He has watched the film 'Withnail & I' far more times than is healthy.

How to book Jason Barlow for your event