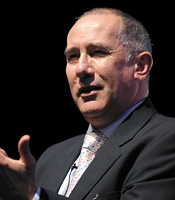 Geoff Burch is an internationally renowned, best-selling business author, commentator and television presenter, and due to the success of his highly sought after and thought-provoking books, he is also in constant demand as a speaker. Indeed, Geoff was previously voted 'Business Communicator of the Year' by the highly respected UK Speechwriters' Guild.

Delighting audiences throughout the world he has been described by his clients as witty, erudite and enigmatic. Geoff is a remarkable raconteur whose unique and refreshing outlook on all manner of business topics has caused him to be hugely popular worldwide for his memorable and uplifting presentations, which have turned his name into a global brand.

His credentials are impressive, working extensively with the world's major blue chip and FTSE 500 companies to inspire and motivate their people - his engaging presentations allowing him to deliver powerful business principles, key messages and new ideas, which are of use to everyone and can benefit all organisations of any size.

As a regular contributor and presenter on television and radio, Geoff Burch is also the star of the hit business show on BBC television, All Over the Shop, which focused on small businesses helping them to survive and thrive. His humorous style and easily explained advice worked well and created a strong following amongst the independent business community.

As a prolific writer, Geoff has many chart-topping business books published around the globe including; Resistance is Useless - the Art of Business Persuasion; Go It Alone - the Streetwise Secrets of Self Employment; Writing on the Wall; The Way of the Dog; Irresistible Persuasion; and his latest work, Self Made Me. Hailed as the most original guru in the business, Geoff is most certainly a speaker with a difference.

KEYNOTE SPEECHES
This is the key note of your conference; the moment that sums up, underlines and encapsulates the whole day. Geoff has made his name taking those key messages and facts that would normally sail over a number of the audience's heads, and has turned them into hilarious stories and striking word pictures that even the most jaundiced will not forget. Whilst they are laughing they are learning, and even after a long day, Geoff will leave them enthused, happy, and motivated.

AFTER DINNER SPEECHES
Geoff Burch is a consummate after dinner speaker where he has the opportunity to really shine. He is hilariously funny, but those powerful messages are still there. His talents are particularly suited to business audiences who want to thoroughly enjoy themselves, but at the end of the event take something useful away.

Geoff Burch's presentation was the highlight of the conference.

Geoff Burch met our brief perfectly. Presentation was outstanding in content, style and suitability for audience and objectives...

Audience found Geoff Burch entertaining, stimulating and challenging – exactly what we were looking for.

Great contribution. Entertaining, amusing, and coming up with the unexpected.

Geoff Burch's presentation was truly outstanding. It combined excellent humour with good common sense business and sales messages. I have never known such universal enthusiasm for a sales conference presenter before...

Geoff Burch was fantastic and everything we hoped for.

Brilliant performance. Serious messages beneath the banter were not lost.

The message was strong and clear and relevant to all.

Clients often ask about purchasing books for giveaways and delegate packs. Below you’ll find a selection of products by Geoff Burch. Click the images to view on Amazon's website. For bulk orders, please speak with your Booking Agent.

How to book Geoff Burch for your event

One of Britain's most in-demand motivational speakers

One of Britain's most in-demand motivational speakers