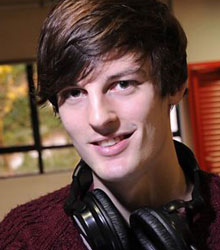 Ed Newton-Rex is not only an entrepreneur and a musician, but one of the world’s leading experts and speakers on artificial intelligence and creativity. Ed founded Jukedeck, the first tech startup in the field of artificially intelligent music composition, which in 2019 was acquired by ByteDance, the company behind social media giant TikTok.

He ran TikTok’s AI lab in London and is now the Product Director for Europe at TikTok. Ed is well placed to speak about AI and creativity, digital disruption and the dynamic changes across the digital media landscape. Ed is an Associate at the Cambridge Judge Business School, and has written for The Independent and The Spectator.

In 2010 Ed graduated from Cambridge University with a Double-Starred First in Music. As a composer and arranger his music has been published by Boosey & Hawkes and Novello. He has composed music for various choirs, groups and festivals, including the King’s Singers, the Choir of King’s College, Cambridge, and the BBC Radio 3 broadcast from the Edington Festival. Ed has written the music for plays at theatres including the Southwark Playhouse, and arranged music for BBC Radio 1Xtra.

Adding to his talents, Ed learnt to code in order to start Jukedeck and built the company’s first AI technology himself, with investment from Cambridge University. Jukedeck developed patented software that autonomously composed original music on demand, allowing non-musicians to easily create rights-cleared music in seconds.

The technology was used to create more than a million pieces of music, which were used as backing music in online videos, ads, TV and radio shows, podcasts and games. Jukedeck won a number of awards, including a Cannes Innovation Lion.

Previously named one of Business Insider’s 30 most creative people in UK tech, Ed is one of 20:40’s Leaders of the Future, announced at the House of Lords in 2019.

Ed Newton-Rex’s insights and humour have made him a compelling and popular keynote speaker and panel expert, and it is no surprise that he has been chosen for media appearances to discuss AI and creativity, including being part of the panel of judges for the International AI Song contest.

Using audio and visual aids, his speeches and talks are invaluable for anyone eager to embrace and enjoy the new creative frontiers where technology and the arts combine – all brought to life by a cutting edge exponent of AI and music, operating at the apex of technology and creativity.

Ed Newton-Rex was an extremely well-received speaker at the Independent Publishers Guild's Spring Conference in 2018. He distilled complex content about Artificial Intelligence into an accessible and engaging session that gave our delegates knowledge and ideas to make their businesses better.

Ed Newton-Rex is a very talented and inspiring speaker. He can explain complex concepts in easily understandable terms, and engages his audience. His summary of music history and technology paired with his experience in entrepreneurship was particularly impressive for our guests at the Sonophilia Spark in Frankfurt

Ed Newton-Rex is an articulate and highly knowledgeable speaker, particularly when it comes to AI & creativity. He presents with clarity and does a great job keeping audiences engaged. I really can’t recommend Ed highly enough

Please can you pass on our thanks to Ed Newton-Rex. His talk today on AI and creativity was truly fascinating and real food for thought. Our audience thoroughly enjoyed it

How to book Ed Newton-Rex for your event