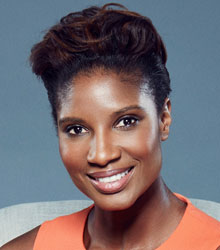 Denise Lewis is considered to be one of the ‘golden girls’ of British athletics, winning gold at the 2000 Sydney Olympics and subsequently being inducted into the UK Athletics Hall of Fame in 2011.

She has twice been runner-up in the BBC’s Sports Personality of the Year awards in 1998 and 2000; was honoured with a MBE in the 1999 New Years Honours and followed up just 12 months later with an OBE.

Brought up by her mother in Wolverhampton, Denise first competed at the heptathlon in 1989 and achieved a best of 5277, two years before finishing fifth at the European Juniors in Thessaloniki.

Within the space of five years she was named the Commonwealth Champion after winning gold in Victoria, Canada, defeating her opponent by just eight points. This was arguably a breakthrough moment in her career.

Two years later, she was the only British woman to win a medal from athletics at the Olympic Games in Atlanta. Her performances went from strength-to-strength and led her to a dramatic Olympic victory in Sydney in 2000.

Since her retirement from Athletics Denise Lewis has carved out a successful career as a presenter and broadcaster, and is considered one of the BBC’s most credible commentators, covering many key athletics events both at home and abroad.

In 2012, she covered both the Commonwealth Games and the London Olympics, and since then has covered the European Team Championships, World Athletics Championships and the Rio Olympics.

In addition to delivering BBC Athletics coverage, Denise has been involved in presenting a range of successful shows and documentaries. This has ranged from presenting two series of Camp Orange for Nickelodeon to joining Dame Mary Peters for the BBC NI documentary, The Run of Her Life. Denise has also presented for BBC One’s Seven Wonders of the Commonwealth, in which she travelled to Zambia to report on the spectacular sight of the Victoria Falls and had a successful stint co-presenting The One Show.

Throughout her career, Denise has used her platform to highlight projects that discuss and promote diversity. In 2012, she anchored the Woman of the Year Awards for ITV1’s Lorraine. Then, in 2016, Denise presented Winners for BBC Two, BBC World and News, which saw her uncover the incredible stories of six female athletes from around the world and the challenges they face simply because they are female. She has also worked to promote Women in Work for International Women’s day.

In addition to her broadcast commitments, Denise has taken on the role of ambassador and patron for several initiatives, events and charities. This includes her work with Breast Cancer Care and Sparks, and she is also the President of Commonwealth Games England.

Can you please extend my thanks to Denise Lewis as I thought she was absolutely perfect! A true professional! I know she was really well received by all the audience. She was a great host on the night.

Clients often ask about purchasing books for giveaways and delegate packs. Below you’ll find a selection of products by Denise Lewis OBE. Click the images to view on Amazon's website. For bulk orders, please speak with your Booking Agent.

How to book Denise Lewis OBE for your event