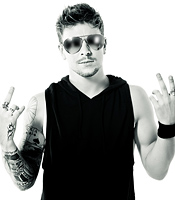 Tobias Mead wowed us all with his incredible back-to-front dance audition in 2010's Britain's Got Talent, and gained three huge 'yes' votes, eventually breezing through to the final.

This wasn't the start of his dancing career though, as Tobias was previously handpicked by Take That to perform on their sold out Circus Tour, and has subsequently gone on to star in Step Up The Official Workout DVD

Will.i.am, the front-man of Black Eyed Peas has even touted Tobias as a 'genius';

"The guy was sensational. I saw Tobias in the semi-finals and what he has done is nothing short of genius. There are a lot of great dancers out there, but that was original and he has done something I had never seen before".

High praise indeed, and it's hard to argue. Tobias Mead is a genius.

Tobias has taken the internet by storm, and his audition has been viewed more than 13 million times on YouTube.

How to book Tobias Mead for your event