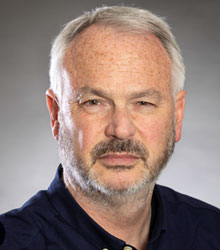 Tim Marshall is a leading authority on foreign affairs with more than 30 years of reporting experience. He was Foreign Affairs Editor and then Diplomatic Editor for Sky News, and before that was working for the BBC and LBC/IRN radio. He left full time news journalism to concentrate on writing and analysis.

He has reported from 40 countries including many conflict zones and covered conflicts in Croatia, Bosnia, Macedonia and Israel. He spent the majority of the 1999 Kosovo crisis in Belgrade, where he was one of the few western journalists who stayed on to report from one of the main targets of NATO bombing raids and he greeted the NATO troops in Kosovo itself on the day that they advanced into Pristina.

Tim reported from the front line during the invasion of Afghanistan and spent time in Iraq, reporting on the country's transition to democracy. He has reported from Libya, Egypt, Syria and Tunisia during the uprisings across the Arab World.

He is the author of the #1 Sunday Times and New York Times bestseller Prisoners of Geography which has sold more than a million copies worldwide and is published in 21 countries; Worth Dying For: The Power & Politics Of Flags published in 2016; Dirty Northern B*st*rds! and Other Tales from the Terraces: The Story of Britain's Football Chants; and his first book, Shadowplay: The Overthrow of Slobodan Milosevic which was a bestseller in former Yugoslavia and continues to be one of the most highly regarded accounts of that period. Divided – Why We Are Living In An Age Of Walls, which was published in 2018.

During his career, Tim has been shot with bird pellet in Cairo, hit over the head with a plank of wood in London, bruised by the police in Tehran, arrested by Serbian intelligence, detained in Damascus, declared persona non grata in Croatia, bombed by the RAF in Belgrade, and tear-gassed all over the world.

However, he says none of this compares with the experience of going to see his beloved Leeds United away at Millwall FC in London.

One of his most notable moments on Sky News involved a six-hour unbroken broadcast during the first Gulf War. He was the last journalist to interview Pakistan's Benazhir Bhutto ahead of her return from exile and subsequent assassination.

His blog, Foreign Matters, was shortlisted for the Orwell Prize in 2010, and he has received awards from the Royal Television Society and The New York TV Festival. He has also written for numerous national newspapers including the Times, the Guardian, and the Daily Telegraph.

Marshall is founder and editor of a news web platform, a site for journalists, politicians, foreign affairs analysts and enthusiasts to share their views on world news events.

As a highly sought-after keynote speaker on world affairs, Tim Marshall has a natural flair for boiling down big issues, such as geopolitics and international diplomacy, to broad-brush terms that will engage and hold captive any audience.

He talks with authority about the importance of understanding the geographic landscape of countries when considering the historic, economic & political context of conflicts and political tension around the world; explaining how we are moving from a multi-polar world back to a bipolar world (as experienced during the cold war) but this time dominated by the US and China: democratic versus authoritarian states.

Tim provides context to the crisis in the Ukraine, including Russia’s access to warm waters and the importance of the North European plain and the 300 mile ‘gap’ made up of Ukraine and Belarus that allows movement of people between eastern and western Europe.

He also looks at the Australian alliance with the US and the current tensions in the China seas together with other geopolitical hotspots around the world and our surrounding orbit.

The Power of Geography
If you want to understand what’s happening in the world, look at a map. Tim Marshall’s global best-seller Prisoners of Geography shows how every nation’s choices are limited by mountains, rivers, seas and concrete.

Since then, the geography hasn’t changed, but the world has. Hear from Tim why the Earth’s atmosphere is the world’s next battleground; why the fight for the Pacific is just beginning; and why Europe’s next refugee crisis is closer than it thinks.

An extremely engaging and insightful speaker. His take on current world events was thought-provoking, yet entertaining.

Tim did a great job. He was also very accommodating in answering questions, and we've had very positive feedback on the session.

He was fantastic. It was a shame he only had an hour as the delegates of our international conference could have spoken to him all day.

Clients often ask about purchasing books for giveaways and delegate packs. Below you’ll find a selection of products by Tim Marshall. Click the images to view on Amazon's website. For bulk orders, please speak with your Booking Agent.

How to book Tim Marshall for your event