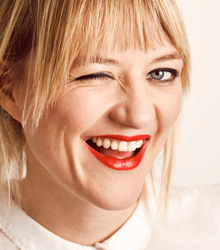 Winner of the 2018 Amused Moose Comedy award, Tania Edwards is a stand-up comedian and writer. With a cut-glass accent that reflects her precision-tooled comedy, Tania Edwards inflicts maximum damage with faint praise. Her credits include Stand Up For The Week, Twit of the Year (Channel 4), Mock the Week, Après Ski (BBC2), and The Unbelievable Truth (Radio 4).

A former law student, Tania recently supported Katherine Ryan on her sell out tour and was a finalist in the Hackney Empire, Amused Moose, Leicester Square, Latitude, and Funny Women competitions.

Her last solo show, Tania Edwards: Electrifying, was named in James Acaster’s top comedy picks for The Guardian, Glamour magazine’s top female comedians to see at the Fringe, and The Mirror’s top five jokes of the Fringe.

How to book Tania Edwards for your event