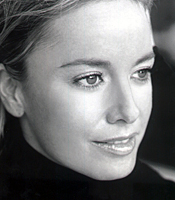 Born on November 5th 1970, Tamzin attended the Stagestruck Theatre Company as a young teenager. At 16 she left school to join the London Studio Centre to study drama and dance. She left with that year's trophy for best all-rounder, which had previously been won by Liz Hurley.

Before television fame grabbed her in EastEnders, Tamzin had bit parts in The Bill and Men Behaving Badly. Her many stage roles have included Summer Holiday, Grease, Carousel, Oliver and Absent Friends.

Tamzin starred in the hit military drama series Red Cap and has won acclaim for her role in the award-winning improvised drama Out of Control.

Tamzin appears as devious Natalie in Final Demand with Simon Pegg (Spaced), based on the novel by the multi-award winning novelist and screenwriter Deborah Moggach.

Did you know?
In 1987 Tamzin appeared as a presenter on the youth show No Limits (billed as 'Tammi Outhwaite').

In 2001 Tamzin presented a BBC documentary about the positive effects garnered by the relationship between man and dolphins.

How to book Tamzin Outhwaite for your event