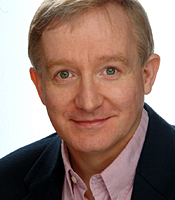 If you're looking for an after-dinner speaker to deliver a unique, highly entertaining and comedy filled speech, you need look no further than leading comedy impressionist Steve Nallon.

Well-known from television and radio shows such as Night of a Thousand Faces, Spitting Image, The Jon Culshaw Show, Rory Bremner - Who Else?, Alistair McGowan's Big Impression, The New Statesman, And This Is Them and First Impressions, Steve's remarkable act uses more than forty voices to take his audience on a comic tour through The World of the Impressionist.

Steve's vast and ever growing repertoire ensures there is something for everyone in his after-dinner entertainment, from sporting celebrities such as David Beckham, Trevor Brooking and Frankie Dettori to the television personalities Jonathan Ross, Anne Robinson, Ozzy Osbourne, Graham Norton, Chris Tarrant and Dame Edna Everage.

Let's not forget the movies, including such stars as Robin Williams, James Mason and Ian McKellen, who guest appears as 'The Wizard Gandalf' - plus a whole host of cartoon voices, from Homer Simpson and Speedy Gonzales to Mickey Mouse and Wallace and Gromit - as well as a bunch of politicians, among them Tony Blair, Ann Widdecombe, Roy Hattersley and Margaret Thatcher. And on top of all that there's the added bonus of some old favourites such as Cilla Black, Alan Bennett, Les Dawson, Julian Clary and Leonard Rossiter.

Tailored & Personalized Scripts
Steve's ability to personalize his script to include key members of the audience truly sets him apart from his peers. With meticulous attention to detail, Steve provides a rare and tailored comedy performance not easily forgotten.

Audience Variety
Steve has a vast amount of experience in corporate entertainment. He has performed to various sizes of audiences ranging from those as intimate as twelve to Gala Dinners of well over a thousand. Steve is able to change style and presentation to match any event. His after-dinner speech is especially suitable for a mixed audience, preferably with an age range from around thirty onwards.

Joining The Client At Dinner
Steve is a charming and delightful table guest who, unlike some entertainers, is always more than willing to join the clients at the dinner, thus adding to the evening's enjoyment. Steve's range of interests across a wide variety of areas invariably ensures witty and topical conversation.

The choice of Steve Nallon as the after-dinner speaker was I think inspired and will certainly go down in my book as one of the most memorable ever.

I think the fact that we had Steve Nallon there made all the difference to the event. Looking round I could see the mood really changed when he came on the stage - he made the awards so much more light-hearted than they would otherwise have been - it was exactly how we wanted the atmosphere to be.

The evening was fantastic! A great success! Steve was everything you said - a real star and a true professional. From the moment we had spoken I knew I was in good hands.

Nallon got plenty of laughs. He did some amusing impressions, including a sit-com version of Celebrity Big Brother, featuring Hyacinth Bucket, Basil and Sybil Fawlty and Del Boy, all of whom were spot on!