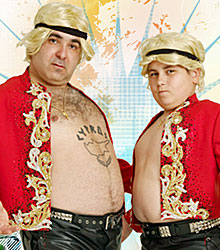 Demetrios (Demi) and Michalakis (Lagi) Demetriou are a British-Greek Cypriot father and son duo, who describe their act as “two fat versions of Michael Flatly with a Greek element” — a hilarious out-take on Michael Flatley's Lord of the Dance routine.

The act originates from when Demetrios used to own a Greek restaurant and would provide live entertainment to his customers after their meal. He took centre stage and would perform various acts, including what has become known as Stavros Flatly.

His son, Michalakis, occasionally visited the restaurant as a young boy, however he had only heard what his dad did, he had never actually seen the act.

Demetrios saw an advert for Britain's Got Talent and thought it would be a laugh to enter the competiton. Michalakis said "if you enter dad I'll do it with you". Demetrios taught Micalakis the Stavros Flatley routine and he picked up all the moves extremely quickly, considering he'd only ever danced at weddings and parties!

Little did they realise, back in 2009, how much Britain's Got Talent would change their lives forever. The routine has literally taken them all around the world, performing in every kind of venue and for the most bizarre and unique events; from The Royal Variety Performance, to shows in China and Monaco.

When taking part in Britain’s Got Talent: The Champions (2019), Simon Cowell commented that it was for acts like Stavros Flatley that the TV show format was created. And fellow judge Amanda Holden commented that they have become an icon for the show.

When people think of Britain’s Got Talent, two acts immediately spring to mind; Diversity and Stavros Flatley, ironically, both from the same series.

Clients often ask about purchasing books for giveaways and delegate packs. Below you’ll find a selection of products by Stavros Flatley. Click the images to view on Amazon's website. For bulk orders, please speak with your Booking Agent.

How to book Stavros Flatley for your event