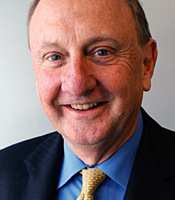 The Rt Hon. Sir Richard Needham is a businessman and former International & Commercial Director of Dyson.

Born in 1942 and educated at Eton, Richard spent his formative years as an MP, entering Parliament in May 1979 as MP for Chippenham. He was a member of the Public Accounts Committee, Parliament's oldest and most prestigious Select Committee and was Parliament Private Secretary to two Cabinet Ministers; 1983-84 to James Prior in Northern Ireland, and 1984-85 to Patrick Jenkin at the Department of the Environment.

In 1985 he became a Minister in Northern Ireland and took considerable risks in insisting that Belfast's bomb-damaged city centre should be reconstructed in glass and steel to demonstrate confidence in the future.

Following the 1992 election, he was appointed Minister for Trade and was responsible for Britain's export strategy as deputy to Michael Heseltine. Over three years he overhauled and re-invigorated Britain's export strategy and is widely accepted in Whitehall as Britain's most successful Trade Minister since the War. In recognition of his work in Northern Ireland and at the DTI he was made a Privy Counsellor in 1994 and knighted in 1997.

Since leaving politics Sir Richard Needham has become involved in a number of businesses, both large and small, as Chairman, Director or adviser; from world giants such as GEC Plc down to start-ups such a Quantum Imaging Ltd. Aside from Dyson, he chairs Imperial College's DeltaDot company which introduced the world's most advanced DNA sequencer. Richard also serves as Vice Chairman of NEC Europe, and Chairman of Avon Rubber. Whilst at Dyson he was James Dyson's right hand man and saw the company grow from a small UK player into the world's largest manufacturer of vacuum cleaners. Richard was instrumental in the development of Dyson's overseas operation in Europe, Malaysia, China and Japan.

As International and Commercial Director of Dyson, Sir Richard Needham was responsible for developing the company's manufacturing and sales operations in Europe, the US and the Far East. Heading-up Dyson's move into China, Sir Richard has developed unrivalled contacts both at the highest reaches within the Chinese Government and at local Party Secretary level. He knows the advantages and pitfalls of doing business in China and, with his range of contacts, is perfectly placed to help companies enter the Chinese market at the right level, in the right place and with the right partners.

In his keynote presentations, Sir Richard sets out how to drive change and chart a course through the economic storm. He shows how setting targets only works if everyone has a clear role, and if the structure allows the strategy to succeed. He also provides a clear insight into turnarounds, risk-taking and innovation in both public and private sectors - at home and abroad.

Sir Richard Needham is author of two books, 'Honourable Member' - a witty guide on how to become an MP and survive in the corridors of power and 'Battling For Peace' - a forthright memoir which provides a unique insight into the way Northern Ireland was governed under Direct Rule.

How to book Sir Richard Needham for your event