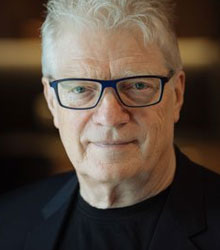 Sir Ken Robinson works with governments, education systems, international agencies, global corporations and some of the world’s leading cultural organisations to unlock the creative energy of people and organisations.

He has led national and international projects on creative and cultural education in the UK, Europe, Asia and the United States. The embodiment of the prestigious TED Conference and its commitment to spreading new ideas, Sir Ken Robinson is the most watched speaker in TED’s history. His 2006 talk, “Do Schools Kill Creativity” has been viewed online over 50 million times and seen by an estimated 350 million people in 160 countries.

For twelve years, he was professor of arts education at the University of Warwick and is now professor emeritus. In 1999, he led a national commission on creativity, education and the economy for the UK Government. All Our Futures: Creativity, Culture and Education (The Robinson Report) was published to wide acclaim.

Sir Ken was the central figure in developing a strategy for creative and economic development as part of the Peace Process in Northern Ireland, working with the ministers for training, education enterprise and culture. The resulting blueprint for change, Unlocking Creativity, was adopted by politicians of all parties and by business, education and cultural leaders across the Province.

He was one of four international advisors to the Singapore Government for its strategy to become the creative hub of Southeast Asia, and the guiding force in Oklahoma’s state-wide strategy to cultivate creativity and innovation in culture, commerce and education.

Sir Ken Robinson has been named as one of Time/Fortune/CNN’s ‘Principal Voices’. He was acclaimed by Fast Company magazine as one of “the world’s elite thinkers on creativity and innovation” and was ranked in the Thinkers50 list of the world’s top business thinkers. In 2003, he received a knighthood from HM The Queen for his services to the arts.

His book The Element: How Finding Your Passion Changes Everything (Penguin/Viking, 2009) is a New York Times best-seller. It has been translated into 23 languages and has sold over a million copies worldwide.

A 10th anniversary edition of his classic work on creativity and innovation, Out of Our Minds: Learning to be Creative was published in 2011. Finding Your Element: How to Discover Your Talents and Passions and Transform Your Life (Viking, 2013), also a New York Times best-seller, is the acclaimed companion to the Element, and provides readers with a practical guide to finding and developing their own talents and vocations.

His most recent book, Creative Schools: The Grassroots Revolution That’s Transforming Education (Viking, 2015), tackles the critical issue of how to transform the world’s troubled educational systems and is now available in 15 languages.

Sir Ken was born in Liverpool, UK. He is married to Therese (Lady) Robinson. They have two children, James and Kate, and now live in Los Angeles, California.

Sir Ken Robinson is one of the world’s most sought-after and inspiring keynote speakers. He makes time whenever he can to speak to events and conferences on issues related to his main areas of work.

Just a few of his most popular corporate keynote presentations include:

Leadership and the Culture of Innovation
While most organisations recognise the need to constantly innovate, they know that it takes more than the occasional good idea. It takes great leadership to facilitate a vibrant culture of innovation that’s nurtured across every level of the organisation. All the Time.

More than just having a vision, leaders can go beyond their traditional roles in order to set their teams up for success. Sir Ken explores what true innovation looks like, how it really works and what leaders can do to maximise the imagination and creativity of their people and resources.

He shares core practices that drive innovators forward, and gives powerful examples from a range of businesses that can pay off in surprising ways when you strive to make innovation part of your organisation’s DNA.

Technology and the Human Advantage
At first glance, these two things might seem to be mutually exclusive. But when you find the intersectional sweet spot between artificial technology and human intelligence and creativity, magic things can happen.

As Artificial Intelligence (AI) becomes more ubiquitous and sophisticated, how does that impact traditional jobs and industries?

Sir Ken identifies our unique powers as human beings: the powers that machine intelligence may complement but cannot replace; and he shows why and how we must develop our human advantage at work, in education and in our rapidly changing communities.

The fourth industrial revolution is here, and along with it comes a new wave of innovation and opportunity. Those who will thrive will embrace the steps needed to ensure that humans are driving the process, not merely reacting to it.

Revolutionising Education From the Ground Up
Education systems everywhere are being reformed to meet the deepening challenges of the 21st century, but even those who do well in education often find themselves challenged by the rapid pace of technological and social change.

Sir Ken argues that the dominant strategy of standardisation and testing is stifling the very capabilities that our children, communities and economies need most. While testing companies are raking in huge profits, there are mounting problems of underachievement by students and tumbling morale among educators.

He gives audiences the “why and how” to move from an industrial to a personalised system of education, and shows how educators, parents and employers can transform the system.

Filled with anecdotes, insights and practical examples from around the globe, Sir Ken inspires teachers, educators, policy makers and business leaders to rethink the real nature and purpose of education, and the practical steps they can to make the urgent changes that are now needed.

The Power of Creativity
How creative are you? How creative are the people you work with? How about your friends - or your children? Ask them. You might be surprised by what they say.

Young children are buzzing with ideas, yet many adults think they are not creative. What happens as we grow up to change our perception? This is a bigger issue than it might seem.

As the world spins faster, in order to thrive and survive – both as organisations and as individuals, creativity is more needed than ever before.

Sir Ken addresses the fundamental questions: What is creativity? Why is it essential in our own lives? Is everyone creative or just a select few? Can creativity be developed and if so how?

With vivid and entertaining examples from many walks life, he explains why creativity matters so much, why you might think you lack it, and what you can do to develop your own natural powers of creativity – starting today.

Finding Your Element
What does it take to achieve the personal satisfaction of doing what you feel you were meant to do in this life? Is it ever too late to find out what that is? (short answer: ‘No’)

In this inspiring and thought-provoking presentation, Sir Ken shows that it’s not through natural talent alone that people achieve their highest levels of success. It involves leading a life of meaning and purpose, which takes a delicate interplay of talent, passion, attitude and opportunity.

Based on his highly acclaimed books The Element and Finding Your Element, Sir Ken takes audiences on a compelling journey of what can happen in all our lives when passion and talent meet. In other words, when you are “in your element”.

The event with Sir Ken was absolutely marvellous! I have to tell you that Ken was a delightful person to work with. He stayed for most of the first day of the Summit, and he met with several of the attendees on an individual or small-group basis. I very much enjoyed meeting him and working with him as well.

The feedback on Sir Ken was so wonderful; our global leadership team was inspired, stimulated and excited. The results exceeded my greatest hopes and of all the speakers, Sir Ken's discussion created the most enthusiastic debate through the evening. Sir Ken's encouragement of the leaders to personally seek stronger levels of creativity in themselves, as we all as creating stronger cultures of creativity and innovation was extremely successful.

Sir Ken Robinson's message is so poignant and inspirational -- he made an indelible mark upon all attendees.

Sir Ken Robinson's presentations were magnificent and have been the talk of the organisation ever since!

Sir Ken was absolutely one of the best speakers I think we’ve ever had! He was so personable, funny and genuine!

Sir Robinson was fabulous! He was witty and entertaining and did a great job providing data-driven and relevant examples of how creativity can be nourished to drive innovation in a corporate setting. He was relevant, to the point, and had the full attention of our audience for well over an hour. We were very pleased to have him as part of this year's CEO Conference.

Clients often ask about purchasing books for giveaways and delegate packs. Below you’ll find a selection of products by Sir Ken Robinson. Click the images to view on Amazon's website. For bulk orders, please speak with your Booking Agent.