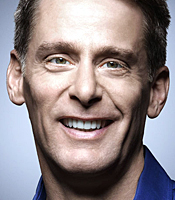 Based in London, Scott Capurro is an award-winning American stand up comedian and just about as camp as they come! Not for the feint-hearted, his comedy material is deliberately provocative and controversial, often referring to gay life and culture, politics, race and racism.

He was ‘reared' in Daly City, California; at age 3, he swam the English Channel. Since 1993, he's avoided AIDS by telling unsavory jokes in every English speaking country. Scott is trusting and thus surrounded by duplicity, yet he continues challenging himself, because he's physically challenged and emotionally unstable.

In 1994, he was awarded the Perrier Award for best newcomer, at the Edinburgh Festival. Described by San Francisco Weekly (free press, edited by lesbians and designed by trannys with large hands and hidden agendas) as "stand-up in the very best possible sense - deadpan, ever-alert and hilarious" Scott has appeared in the hit Hollywood movie Mrs Doubtfire, where, effortlessly, he played a homosexual; and Star Wars: Phantom Menace, where, breathlessly, he wore a body stocking.

In America, Scott has been a frequent guest on the Sarah & Vinnie's Morning Show of Radio Alice 97.3FM KLLC San Francisco. And here in the UK, he is a regular panellist on the topical discussion series The Wright Stuff, hosted by Matthew Wright.

This is as confrontational as comedy gets. One routine, replaying the imagined aggressive bedroom behaviour of black men, even had this heard-it-all hack feeling queasy. Strictly for strong stomachs.

If you thought comics like Ricky Gervais pushed boundaries then nothing will prepare you for Scott Capurro. Having won the coveted Perrier award in 1994, the San Franciscan comic has gone from strength to strength while refusing to sell out, making each show more uncompromising than the last. He is, in my opinion, the bravest and funniest comedian on the circuit.

There are some topics which just aren't suitable for comedy. Luckily for us Scott hasn't worked out which ones they are yet. He's filthy, camp and utterly fearless. There's also a huge amount of heart and intelligence at work in this show if you really listen carefully to what he's actually saying.