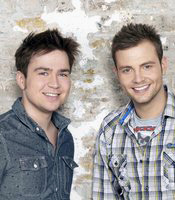 Book Sam and Mark
add to shortlist
About

Double BAFTA winning presenters Sam Nixon and Mark Rhodesfirst appeared on our screens as contestants inPop Idol in 2003. Their friendship began whilst filming backstage and they have been inseparable ever since.

In 2009, Broadcast Magazine ranked them “Number One Rated Children’s TV Presenters” for Who Wants To Be A Superhero?having previously beennominated for aChildren’s BAFTA for Level Up.

Best-known for presentingSam & Mark’s Big Friday Wind Up(CBBC) for which they receivedaChildren’s BAFTA in 2013 and 2015, Sam & Mark presentaweekly radio show which broadcasts live every Sunday on Free Radio across the West Midlands.

In addition to guest appearances on Big Brother’s Little Brother, The Xtra Factor, Pressure Pad, Ultimate Brain, My Dog Ate My Homework, Celebrity Juice and This Morning, Sam & Mark were contestants on Celebrity Total Wipeout, Let’s Dance For Sport Relief and Dancing On Ice and headlined the Lollibop Festival 2014 to crowds of up to 20,000.

Sam & Mark are heavily involved with various charities. They have raised thousands of pounds, and just as importantly, awareness for Whizz-Kidz, a charity that Mark in particular has a personal connection with. The duo were delighted to become the first official patrons of the charity.

They have recently published two children’s books for Scholastic entitled The Adventures of Long Arm and Long Arm vs The Evil Supply Teacher.

Clients often ask about purchasing books for giveaways and delegate packs. Below you’ll find a selection of products by Sam and Mark. Click the images to view on Amazon's website. For bulk orders, please speak with your Booking Agent.

How to book Sam and Mark for your event

Tags for Sam and Mark