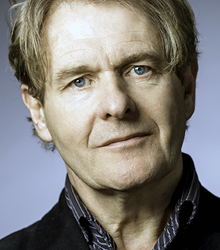 Robert Bathurst has worked extensively on stage and screen for over 30 years. He has appeared in a number of popular television shows including the award-winning ITV series Downton Abbey. He also stars in the hugely popular Cold Feet.

Robert Bathurst was born in the Gold Coast. His family moved to Dublin, Ireland when he was 2 years old and was eventually enrolled at an Anglican boarding school. In 1966, the family moved to England, and Robert transferred to Worth School in Sussex, where he took up amateur dramatics. At the age of 18, he read law at the University of Cambridge and joined the Cambridge Footlights group, alongside Hugh Laurie, Rory McGrath and Emma Thompson. After graduating, he took up acting full-time.

Other TV credits include My Dad's The Prime Minister, The Queen, Roman's Empire, The Pillars of the Earth, Hornblower, Kingdom, Goodbye Mr. Steadman, Joking Apart, Red Dwarf and the BBC adaptation of Jane Austen's Emma.

Robert Bathurst also performed a 75 minute one-man theatre show as Alex - the country's favourite obnoxious cartoon investment banker - a parody of the world of banking and the cartoon character which appears daily on the front page of the Daily Telegraph Business Section.

The ‘Alex’ cartoon about life in the City of London is famous for appearing every day on the front page of the Daily Telegraph Business Section. Now, presented by Robert Bathurst, Alex has taken to the stage for a live show which has toured the world, and his radio show on Classic FM won a Sony award.

Masterfully delivered by Robert Bathurst, ‘Alex’ parodies the world of banking with a confident, front-foot and a compelling demeanour. Alex covers topical issues such as the credit crunch; the bail-out; the balance between banks and the government’s money, all built into an apposite, unreconstructed rant – yet despite himself he exudes vulnerability and is immensely likeable.

The show works perfectly as a 20 minute after dinner show and there is flexibility with the content – a live cartoon session can even be worked into the show.

First class act. Intelligent, unique humour - had our guests in stitches. Get in quick!

How to book Robert Bathurst for your event