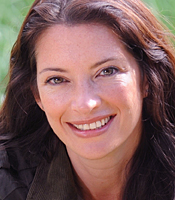 Rachel De Thame is currently presenting Gardeners' World for BBC2 and Countrywise for ITV1. She also presents the BBC1 and BBC2 coverage of the major RHS gardening shows, including The Chelsea Flower Show and Hampton Court Flower Show.

Rachel trained as a ballet dancer at The Royal Ballet School and subsequently in History of Art at City Lit. She initially followed a successful career as a model and actress. Then inspired by a life-long love of gardening, Rachel re-trained, studying at The English Gardening School, where she gained qualifications in Practical Horticulture and Plants & Plantsmanship. From that point on, Rachel's career would combine her front-of-camera skills with her passion for plants and and knowledge of horticulture.

Rachel De Thame was a key member of the presenting team on BBC 2's flagship gardening series Gardeners' World for nine years, she then continued to do features and has returned to the core team in March 2011. She has also developed and successfully pitched various ideas for strands and one-hour specials under the Gardeners' World umbrella, including Rachel's Border. Her proposal for a one-hour special The Fate of the Cottage Garden, went on to win the Garden Media Guild award for Television Broadcast of the Year 2008.

Rachel fronted her own 6 part series Small Town Gardens, followed by another series Gardening With the Experts – also 6 episodes – both for primetime BBC2. She has presented BBC Gardener of the Year on several occasions. Appearances on other horticultural interest programmes for the BBC, include The Joy of Gardening and 40 Years of Gardeners' World.

Her contribution to other long running series, include team captainship for a series of Going For a Song and appearances on Call my Bluff, both for the BBC, and Heart of the Country for ITV1. She has also featured on Restoration, The Stirling Prize for Architecture and Blue Peter for the BBC, made appearances on The Alan Titchmarsh Show, Richard and Judy and The Vanessa Show for ITV 1and Market Kitchen for the Food Channel. Rachel was also a guest on Friday Night with Jonathan Ross for BBC1. She has appeared three times on the cover of Radio Times.

In addition to her television and radio work, Rachel De Thame has written two gardening books – Rachel de Thame's Top 100 Star Plants and Small Town Gardens. She co-authored a third Gardening With the Experts and contributed to Moving On Up, edited by Sarah Brown.

As a journalist, Rachel writes a regular gardening column for The Sunday Times. Contributions to other publications include The Daily Telegraph, The Guardian, Gardeners' World Magazine, Amateur Gardening Magazine and New Eden Magazine.

Since embarking on her career in television, Rachel De Thame has hosted corporate events and been the 'face' of several advertising campaigns, including Tesco and Rachel's Organic. Her intellect and beauty, teamed with her calm and professional demeanour, make Rachel De Thame the perfect ambassador, speaker, host or facilitator for a whole variety of corporate events.

In a horticultural capacity Rachel designed a silver medal-winning show garden for The RHS Chelsea Flower Show, and has co-created show gardens for BBC Gardeners' World Live. She continues to design and develop her own seven-acre plot, where she is currently working on a large kitchen garden. Rachel is married with four children and lives in London and Oxfordshire.

Clients often ask about purchasing books for giveaways and delegate packs. Below you’ll find a selection of products by Rachel De Thame. Click the images to view on Amazon's website. For bulk orders, please speak with your Booking Agent.

How to book Rachel De Thame for your event