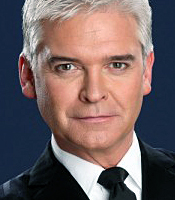 Phillip Schofield is one of the UK’s most loved TV presenters, having spent nearly 40 years hosting some of the biggest shows on screen. Since gaining popularity working as a children's presenter for the BBC hosting 'The Broom Cupboard' in 1985, Phillip has gone on to present multiple series of 'Going Live' and more recently, 'Dancing On Ice', 'The Cube’, ‘5 Gold Rings’, 'Mr & Mrs’ and two Royal Weddings.

He has also performed on stage as Joseph in ‘Joseph and the Amazing Technicolour Dreamcoat’ and as ‘Dr Dolittle'.

Phillip joined This Morning in September 2002 and co-presents the show four days a week alongside his "on screen wife" Holly Willoughby, which has won the National Television Award for Best Daytime Programme 15 times.

By age ten, the young Phillip Schofield had already decided that he would like to pursue a career in broadcasting and began to write to the BBC. He was finally offered a job in September 1979 at Broadcasting House, London, working for Radio outside broadcasts as a booking clerk.

However, at 19, he left the BBC and emigrated with his family to New Zealand. Within a year, he was presenting on Radio Hauraki in Auckland and went on to present on television. Three and a half years later, he decided that it was time to return to Britain.

Within four months of returning to the UK, the BBC presentation department offered Phillip the job of fronting Children's BBC from the Broom Cupboard; the first time in 35 years that an 'in-vision' presenter had linked the weekday afternoon programmes. Phillip accepted and stayed with presentation for two years. He then went on to present five series of the popular live Saturday morning show Going Live, four series of Take Two, three series of his own quiz show, The Movie Game, two series of the highly acclaimed travel show Schofield's Europe and a series of Televisions' Greatest Hits.

In 1993, he signed a two year contract with ITV and starred in Andrew Lloyd Webber's Joseph and the Amazing Technicolour Dreamcoat at the London Palladium. Phillip then took the show on tour around the UK and Eire from December 1993 until February 1995. In December 1995 he took up the 'Dreamcoat' again at the Oxford Apollo Theatre and in February 1996 moved to the Hammersmith Labbatts theatre through to the middle of 1996.

In 1996, Phillip also signed an exclusive contract with what was then Carlton Television and presented a number of shows including Schofield's Adventures in Hawaii (a one hour special), Schofield's Quest, two series of Tenball and two Christmas specials Schofield's Gold and Six Little Angels. That same year also saw Phillip presenting two new series, One In A Million and Schofield's TV Gold, followed by a one off Christmas special, Now We're Talking.

In 1997 Talking Telephone Numbers returned for it's fifth series and a further series of One In A Million ran through to July 1997.

Phillip Schofield is a popular and sought-after host for corporate dinners and award ceremonies.

Clients often ask about purchasing books for giveaways and delegate packs. Below you’ll find a selection of products by Phillip Schofield. Click the images to view on Amazon's website. For bulk orders, please speak with your Booking Agent.

How to book Phillip Schofield for your event