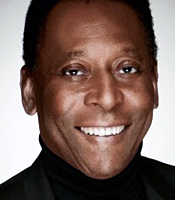 Book Pele
add to shortlist
About

In a world of seven billion people where football is the foremost sport, Pelé stands alone as the most iconic figure in the beautiful game. Revered and recognised across the globe, he remains committed to helping the sport and society in any way he can.

Named ‘Football Player of the Century' by FIFA, Pelé's extraordinary career saw him spend nearly two decades at his boyhood club, Santos, lift three world cups for Brazil and become the all-time leading scorer in the history of the sport, a record unlikely to ever be broken. Having retired from the game in 1977, Pelé maintains his commitment to sport and to society by fulfilling various roles as a spokesperson, ambassador and philanthropist.

Pelé grew up in poverty in Bauru in the state of São Paulo. He earned extra money by working in tea shops as a servant. Taught to play by his father, he could not afford a proper football and usually played with either a sock stuffed with newspaper and tied with a string or a grapefruit.

His remarkable story from such humble beginnings to the greatest football player the world has ever seen is a truly incredible tale. His dedication to the industry is second to none and his work in philanthropy continues to do good the world over.

Key statistics:
- Named ‘Football Player of the Century' by FIFA
- Named in Time Magazine's “Top 20 Most Important People of the 20th Century”
- Honorary President of the New York Cosmos
- UN Ambassador for Ecology and the Environment

How to book Pele for your event