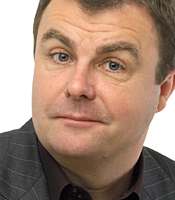 A rare talent within the media, Paul is as well known behind the cameras as in front, on radio as on television, and as a serious journalist as well as a quick-witted celebrity.

Born on his father's 18th birthday, New Year's Eve 1956, Paul is the eldest of five boys and one girl. He grew up in Leytonstone, North East London where he went to the first comprehensive in the area, and then went on to Kent University and then Exeter to read and research English literature.

Having trained as a journalist in the west country Paul then got a job at LWT working for Greg Dyke as a researcher on the Six O' Clock show with Michael Aspel, Chris Tarrant and Danny Baker. He later ended up editing that show, as well as the London Programme. Other behind-the-camera credits include two series of Channel 4's cult classic The Word, Tonight with Johnny Vaughn and Ant and Dec's Christmas Takeaway.

His first job as a TV presenter was on a serious current affairs show called Eyewitness which ran for two years and saw him filming in Sicily, the States, Brazil and Russia. He also fronted the police appeals show Crime Monthly for ITV, Big City and presented a gazillion game shows including All Over The Shop and No Win No Fee for the BBC, Jeopardy for Sky One, Endurance UK for Challenge TV. And Tellystack, Mystic Challenge, You Don't Say, Upshot, Ballpark, Mind the Gap, A Slice of the Action, Life's a Punt and many, many more.

Paul has also guested on everything from Through the Keyhole, Stars in their Eyes and Celebrity Mastermind to Who Wants to Be a Millionaire, The Weakest Link, Dickinson's Real Deal and Donny Osmond's Pyramid Game.

In 2004, Paul became resident showbiz correspondent and film critic for ITV’s This Morning. In the past he has written regular columns for Tatler, News of the World and the Daily Star on Sunday.

As a presenter Paul Ross far prefers radio - because he feels “it's more intelligent and less controlled by dull scheduling and compromise”. He has been hosting shows since the early nineties - mainly talk shows including BBC London 94.9's flagship breakfast show with Jo Good and BBC Southern Counties Saturday morning show.

Paul Ross was an exceptional host and I would recommend him for any event. He judged the tone of the event just right and made it an extra special night for everyone. A true professional who was a joy to work alongside.

Just a note to say how much we valued and enjoyed Paul Ross' company on Wednesday night. He more than surpassed our expectations, and was entertaining, engaging, likeable, enthusiastic and respectful throughout – all with lively banter and lots of laughs along the way. What a great bloke! Many thanks for your help and to Paul Ross for giving us and our staff a memorable evening.

How to book Paul Ross for your event