Sensational ‘dad' dance group as seen on Britain's Got Talent 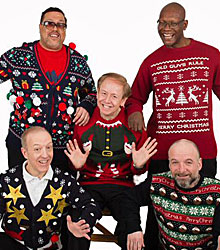 Old Men Grooving are the unlikely sensational all-male five piece dance group that wowed millions of viewers all the way to the Britain's Got Talent final in 2015.

Comprising of Patrick Alan, Richard Banks, Fred Folkes, Phil Stanley and Bret Jones, the five dad dancers in sweaters and cardigans look like they should be sitting in front of the television, not performing on it.

The group formed in 2014 when Sainsbury's were looking for dancers to take part in an online advert for the supermarket chain's Christmas jumpers (then with David Welch in the line-up, who’s since been replaced by Richard Banks). The YouTube video has clocked up over 26 millions hits for the chain and gave the dads the idea to audition for Britain's Got Talent.

Shot with an amateur-style and feel on handheld cameras, the advert featured the five middle-aged members of a ficticious dance troupe called The Christmas Jumpers performing a choreographed routine to a remix of Tchaikovsky's Dance of the Sugar Plum Fairy.

After their Britain's Got Talent audition Old Men Grooving received a standing ovation from the judges and four resounding “yeses”. Simon Cowell commented "A lot of dance acts I get bored rigid by, but I could watch you guys all night" and David Walliams added "You've made dad dancing cool". The group sailed through the live semi-finals to a place on the coveted grand live final.

They came 4th in the public vote, behind Jules O'Dwyer with Mattise, Jamie Raven and Cor Glanaethwy, narrowly missing out on a spot in the coveted top three they received an impressive 10.2% of the votes, and just 0.5% behind the 3rd place act.

Old Men Grooving say they are just “a group of friends out to show the UK that age should never stop you dancing and enjoying dance!!!!!!” We say, book this original and highly entertaining dance group today for your office party, corporate awards dinner or for that special private anniversary or birthday party to surprise all your family, friends and guests... proving beyond doubt that ‘dad dancing' really is COOL!

Whether it’s the switching on of town centre Christmas lights, corporate bookings, festivals or TV appearances such as variety shows and commercials, Old Men Grooving (OMG) can turn their talents to pretty much anything.

OMG are currently offering live performances consisting of two or three dance routines followed by a meet and greet with your guests.

My party on Saturday was an enormous success due in no small part to the wonderful Old Men Grooving. They were superb. Their routines were brilliant and they thrilled all the guests when they joined us on the dance floor for some time after their performance. Please pass on my thanks to them and thank you for your service in making the arrangements.

Sensational ‘dad' dance group as seen on Britain's Got Talent