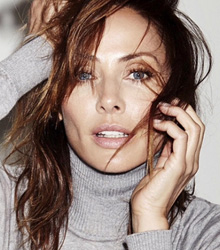 One of 1998's surprise pop successes, Imbruglia's first brush with stardom came when she played Beth in the popular Australian soap opera Neighbours. She had originally started out as a singer, turning to acting later. Imbruglia spent two years on Neighbours, but after leaving struggled to find work in Australia.

A move to England in 1996 offered little in the way of career progress, but she began turning her thoughts and experiences into songs. In 1997 she gained a contract with RCA Records in London, helped by her perceived affinity with the chart-topping 'feminine angst rock' of Alanis Morissette and Meredith Brooks. Recorded in London with Phil Thornalley (ex-Cure) and Nigel Godrich (Radiohead), in Los Angeles with Mark Goldenberg (Eels), and in New York with Mark Plati (David Bowie, Deee-Lite), Left Of The Middle sold strongly on the back of the success of her debut single, 'Torn', a massive hit throughout Europe, and the number one airplay hit in America for over 10 weeks.

The album reached number 10 on the US album chart, although Imbruglia subsequently ran into controversy over the songwriting credits for 'Torn' (originally recorded by US band Ednaswap). Subsequent UK hit singles, 'Big Mistake' (number 2), 'Wishing I Was There' (number 19) and 'Smoke' (number 5) repeated the highly melodic indie-rock formula of her debut.

The following autumn, Imbruglia contributed 'Identify', co-written by Billy Corgan and Mike Garson, to the soundtrack of the movie Stigmata. The much anticipated follow-up to Left Of The Middle was released in February 2002. White Lilies Island attempted to push Imbruglia into edgier territory on such tracks as 'That Day' and 'Do You Love?', although she enjoyed more success with the more traditional 'Wrong Impression', the lead-off single in North America.

How to book Natalie Imbruglia for your event