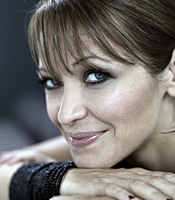 Naomi Cleaver is a design consultant and interior designer whose assured and inspirational insight into how good design can enhance quality of life has made her the perfect choice to present series' of popular prime-time shows on domestic design, decor and even food.

Television credits include Other People's Houses (Channel 4), Britain's Best Home (Channel 4), Honey, I Ruined the House (Channel 4), The World's Greatest Dishes (Sky One) as well the ratings-busting Grand Designs: Trade Secrets (More 4). In May 2008 Naomi co-presented Grand Designs Live (Channel 4), at one moment memorably being suspended upside down in a black PVC cat-suit in order to test construction standard glue.

Off screen Naomi operates two design offices: one in London and the other on the island of Nevis in the Caribbean. A popular speaker, Naomi lectures frequently on design and decor, as well as judging and hosting many design events.

The first agency of its kind, Naomi was instrumental in over 800 projects over a ten year period across the UK, Europe and the USA. Clients included many private individuals as well as corporations and organisations, such as Nike and BAFTA, plus work for charities such as CRASH, the construction and property industry's charity for the single homeless.

Clients often ask about purchasing books for giveaways and delegate packs. Below you’ll find a selection of products by Naomi Cleaver. Click the images to view on Amazon's website. For bulk orders, please speak with your Booking Agent.

How to book Naomi Cleaver for your event