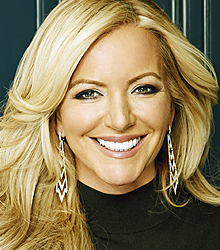 She is regularly listed as one of the UK's top female entrepreneurs, and it was upon that simple concept Baroness Mone built her career and influence; being honoured with a Life Peerage to the House of Lords and an OBE from HM The Queen, for outstanding contributions to business.

Entrepreneurial spirit was prevalent from an early age in Michelle, who grew up in the impoverished East End of Glasgow when, at the age of fifteen, her father fell ill and was subsequently declared paraplegic and wheelchair bound for life. This forced the young Michelle Mone to leave school without any qualifications in search of full-time employment, sparking her instinct for entrepreneurship.

At the age of just 22, she excelled herself and quickly climbed the ranks from office junior to Head of Sales and Marketing in Scotland for the Glasgow-based Labatt's Brewers, however she was made redundant after just two years.

In 1996, after only six weeks unemployed, Michelle was at a dinner dance wearing a very uncomfortable cleavage-enhancing bra. It was here the Baroness had an epiphany on what the lingerie industry was missing, and the world-famous Ultimo bra was born; a bra that was more comfortable and cleavage-enhancing than any other bra on the market.

After the launch of Ultimo, Michelle Mone quickly established herself as one of Scotland's finest exports, winning the World Young Business Achiever Award in 2000 at the Epcot Centre in Florida, as well as Business Woman of the Year at the Corporate Elite Awards in London.

Her status as one of the UK's leading entrepreneurs was confirmed soon after when HRH Prince Charles invited her to join the board of Directors for The Prince's Trust.

In October 2005, Michelle attended a speaking event with former US President Bill Clinton and Mikhail Gorbachev, leading to her involvement in setting up the Women's Enterprise Project in the Middle East in support of The Sultan of Oman. It was then she began to realise that her experiences and wisdom could transform lives and inspire others in the face of adversity.

Despite facing a challenging few years in her private life, suffering an acrimonious divorce and battle to retain her business, Lady Mone is now one of the UK's most notable business speakers and is in-demand all over the world.

She has inspired, coached and mentored audiences and individuals in over 50 countries. This culminated in Michelle Mone being given her Life Peerage in 2015, then being asked by the Prime Minister to conduct The Mone Review; an insight into helping start up businesses in deprived areas.

The proud mother of Rebecca, Declan and Bethany, Michelle sold Ultimo to global lingerie giants MAS Holdings - one of the world's largest manufacturers of intimates, with a $1.4 billion turnover and 63,000 employees. A truly inspiring story, Baroness Michelle Mone revealed all of her struggles and successes in her 2015 autobiography My Fight to the Top, which ranked at number one in three Amazon charts.

Michelle Mone's success continues to soar, as does her public profile, and is a regular fixture on national television as an expert in diet, health, fashion and business. She also boasts a Twitter following in excess of 900,000 people, a figure that is growing daily.

One of the UK’s most notable business speakers. Baroness Michelle Mone has inspired, coached and mentored audiences and individuals in over 50 countries over the last two decades.

She has spoken around the world at some of the most prestigious events and gatherings sharing the stage with the likes of President Bill Clinton, Mikhail Gorbachev, Sylvester Stallone and Al Pacino.

Now recognised as one of the UK's leading motivational speakers, Michelle Mone has developed a portfolio of relevant and compelling speeches to motivate and share her vast knowledge with others to inspire future generations.

She genuinely connects with the audience, identifies with each person in the room and delivers speeches that contain the perfect blend of storytelling and tangible advice that businesses and entrepreneurs can take away with them and implement immediately.

Michelle Mone was so exceptional I want her to know how well she was loved by our audience. I was moved to tears (I have had breast cancer and when she said her fee was being sent to that cause it was as if it was meant to be that we chose her to speak). She will cause us problems as I am charged with improving on her next year.

Michelle Mone was very inspirational- key messages for anyone that wants to be successful- regardless of sex. Take away message "work hard, play hard and give something back

Thank you! Every student was so very very impressed. I would say Michelle Mone was the best speaker we have ever had. Everything that she mentioned was a personal story of her commitment, ambition and drive. Very inspirational to all the students.

I have had nothing but fantastic feedback from our client who was delighted at how easy it was to work with Michelle Mone and how engaging she was with the audience. She was a big success and they feel she is the best speaker they have ever had at their events

Michelle Mone was truly a delightful guest speaker at our recent business conference Routes to Growth; she used her own time to interact with our guests, effortlessly whipping the crowd into a frenzy. Her presentation was extremely personal, documenting how her life has intertwined with her business endeavours and captured the heart of her tremendous success story. She enthralled the crowd with her raw honesty and quick wit and provided some true inspiration that lifted the energy of the entire conference

Michelle Mone delivered her inspirational story of business success to a large audience of small and medium enterprise owners. Our audience was thoroughly engaged throughout the keynote address and left both inspired and motivated to succeed with their business ventures. Michelle is not just an extraordinarily successful entrepreneur, but a truly thought-provoking and stimulating speaker

The talk given by Lady Michelle Mone at the National Achiever’s Conference in Dubai was exceptional. Being both entertaining and inspiring, Lady Mone is undoubtedly a brilliant spokesperson for female entrepreneurs globally. Her unwavering focus, vision and determination establishes her as a leading example for the empowerment of women

Clients often ask about purchasing books for giveaways and delegate packs. Below you’ll find a selection of products by Baroness Michelle Mone OBE. Click the images to view on Amazon's website. For bulk orders, please speak with your Booking Agent.

How to book Baroness Michelle Mone OBE for your event

To book Baroness Michelle Mone OBE, please submit an online enquiry, email bookings@nmp.co.uk or speak with one of our booking agents on +44 (0)1372 361 004.