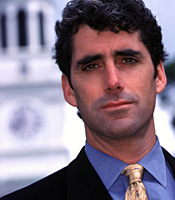 Michael Vatis is Executive Director of the Markle Foundation Task Force on National Security in the Information Age.

Michael Vatis is an attorney and also serves as the Executive Director of the Markle Foundation Task Force on National Security in the Information Age, a group of technology company executives, former government officials, and civil libertarians examining how government can use information, and information technology, more effectively in combating terrorism without infringing on citizens' rights.

From 2001 to 2003, Michael served as the first Director of the Institute for Security Technology Studies at Dartmouth College, a national centre for counter-terrorism and cyber security research and development. Simultaneously, he created and served as first Chairman of the Institute for Information Infrastructure Protection (known as the I3P), a consortium of leading research organisations which earlier this year published a national agenda for cyber security research and development.

From 1998 to 2001, Michael served as the founding director of the National Infrastructure Protection Centre. The NIPC, which is now part of the new Department of Homeland Security, was the US government's principal agency responsible for detecting, preventing investigating, and responding to 'cyber' attacks, including cyber crime, cyber terrorism, and cyber espionage.