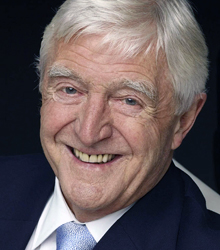 Sir Michael Parkinson began his career as a journalist on local papers and as a features writer for the Daily Express and Manchester Guardian.

His first foray into TV came when he joined Granada Television in 1962, first as a producer, and then appearing in front of the camera. At Granada he wrote and presented Cinema, which introduced him to a significant TV audience, after which he moved to the BBC to join the 24 Hours team. His talk show Parkinson was launched in 1971 and ran until 1982.

He has also had a successful career on radio. In 1996 Michael launched a Sunday morning show on Radio 2 – which ran for 12 years. In 1998 he was separately honoured for his work in journalism, radio and television. The same year saw a new series of Parkinson start on BBC1 lasting until 2003 and winning many awards including a BAFTA in 1999.

In 2004 he successfully transferred Parkinson to ITV until his retirement from the show in 2007. Parkinson was voted in the top ten in a British Film Institute poll of the Best Television Programmes Of All Time. The show ran for over 800 episodes and Michael interviewed more than 2,000 of the world’s most famous people during its run.

He was awarded a CBE in June 2000 and a knighthood for services to broadcasting in the 2008 New Year’s honours list.

Sir Michael was installed as Chancellor of Nottingham Trent University in 2008, a post he held until 2014. He started his own Production Company and his autobiography, Parky, topped the Best Sellers charts in 2008/2009. 2009 saw Michael embark on a tour entitled Parky: The One Man Show, in which he told of his life and career to packed-out venues in Australia and New Zealand.
2010 saw the launch of two further projects, headed by Michael and Parkinson Productions – the release of another book –Parky’s People– and a Best Of Parkinson DVD.

In March 2011 Michael and Sir David Frost collaborated in Sydney to produce two programmes for Channel 9 Australia –Frost Over Parkinson and Parkinson: The Frost Interviews.

Clients often ask about purchasing books for giveaways and delegate packs. Below you’ll find a selection of products by Sir Michael Parkinson. Click the images to view on Amazon's website. For bulk orders, please speak with your Booking Agent.

How to book Sir Michael Parkinson for your event