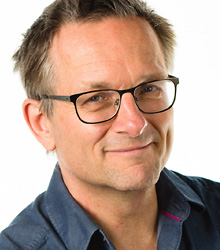 Michael studied PPE at Oxford and then became an investment banker...before realising that this really wasn't the industry for him...so he retrained as a doctor.

After studying medicine at the Royal Free Hospital in London and qualifying as a doctor...he realised that this wasn't really the industry for him either!

Michael joined the BBC as a trainee assistant producer and over the ensuing 25 years has made numerous science and history documentaries for the BBC, first behind the camera and more recently as a presenter.

He was executive producer of QED, Trust Me I'm a Doctor and Superhuman. He has worked with John Cleese, Jeremy Clarkson, Professor Robert Winston, Sir David Attenborough and Professor Alice Roberts. He devised and executive-produced three of the most popular science and history programmes of the last decade: Pompeii- the last day, Supervolcano and Krakatoa. He has also made a number of business programmes, including, Trouble at the Top and Back to the Floor.

As a presenter he has made a dozen series for the BBC, including Medical Mavericks, Blood and Guts, Inside Michael Mosley, Science Story, The Young Ones, Inside the Human Body, Eat, Fast & Live Longer, The Truth about Exercise, Pain, Pus & Poison and The Genius of Invention. Trust Me, I'm a Doctor returned to BBC 2 with Michael now acting as a presenter as well.

Following the extraordinary interest in and success of Eat, Fast & Live Longer Michael co-authored a book called The Fast Diet with Evening Standard journalist Mimi Spencer. The Fast Diet was published by Short Books in 2013. Followed by the international bestseller, The 8-week Blood Sugar in 2015. Michael's latest book, The Clever Guts Diet was published in 2017 and is a number 1 best seller.

He has won numerous awards, including being named Medical Journalist of the Year by the British Medical Association in 1995.

Michael writes for the Mail on Sunday, The Times and The Independent. He is a regular columnist for Focus magazine and Eureka.

Dr Michael Mosley is a popular after dinner speaker, keynote speaker and sought-after conference facilitator for corporate events and award dinners throughout the UK and Europe.

Clients often ask about purchasing books for giveaways and delegate packs. Below you’ll find a selection of products by Dr Michael Mosley. Click the images to view on Amazon's website. For bulk orders, please speak with your Booking Agent.