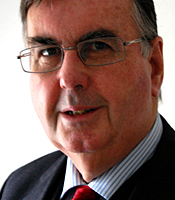 In June 1991 Michael Brunson's interview with Margaret Thatcher made headlines when she revealed to him her wish to take her seat in the House of Lords, and told him of her thoughts as her time as Prime Minister drew to a close. Brunson again interviewed Mrs Thatcher at length in November 1991, exactly a year after her dramatic resignation, in which she made known her views on European economic and monetary union.

Other Stories covered include, John Major's difficulties over Europe, and the rise of New Labour under Tony Blair. In 1995, he was leader of the editorial team which won the Royal Television Society's News Event Award, for ITN's coverage the previous year of the sudden death of the Labour Leader, John Smith.

Clients often ask about purchasing books for giveaways and delegate packs. Below you’ll find a selection of products by Michael Brunson. Click the images to view on Amazon's website. For bulk orders, please speak with your Booking Agent.

How to book Michael Brunson for your event