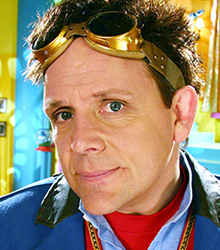 Britain's Got Talent semi-finalist, Marty Putz, began his career in his hometown of Toronto, Canada. His popularity on the University & college circuit in both Canada and the US led to winning “Campus Comedian of the year”. An appearance at the Just for Laughs International Comedy festival landed Marty the hosting position on Fox’s Emmy award winning kids show “Not Just News”.

Prompted by the lure of agents and a better climate, Marty made the move to Los Angeles, where he has happily called it home for the last 20 years. However, he frequently visits the UK and Europe for performances and is always seeking his next excuse to fly over.

Appearances on “The Tonight Show with Jay Leno”, Fox’s “Comic Strip Live” and Comedy Centrals “Make Me Laugh”, continued to establish Marty in the world of comedy. His youthful style and infectious enthusiasm made an easy transition to encompass an audience of all ages making him a true family performer playing in sold out shows as far away as London, Cyprus, Australia and New Zealand.

Ever expanding, Marty Putz created, wrote and produced two seasons of the Canadian Gemini award winning television show ‘TheTournament’ for CBC Canada, a mockumentary comedy series loosely based on his beloved peewee hockey days. “The Tournament” garnered rave reviews from both The New York Times and the San Francisco Chronicle. With the Cartoon Network, Marty created, wrote and starred in the television pilot “Marty’s Party”. In addition, he scripted a live action version of Marty’s Party for Cedar Fair Entertainment, which ran in multiple theme parks across North America. It was here that Marty’s whimsical imagination caught the eye of Can You Imagine…a premier manufacturer of novelty products. Together they created “Putz Gear” and have begun to make Marty’s inventive silliness available to the general public.

In 2014 Marty was enticed back into live performing when he was approached to headline “The RAZZAMATAZZ Comedy Show. This sold out 15 city tour was founded to raise money and awareness for the KIDS FOUNDATION OF AUSTRALIA/NEW ZEALAND.

In 2018, Marty appeared on British television in the hugely successful talent competition, Britain’s Got Talent, where he wowed all four judges with his zany physical comedy and reached the live semi finals, where he memorably covered Simon Cowell in toilet roll and soaked Alesha Dixon and Amanda Holden!

Parents, are you tired of sing‐alongs and stuffed characters? Then Marty Putz is a MUST SEE show for you and your family. Loaded with gizmos, gadgets and weird inventions, Marty and his madcap comedy show has been labelled the "Jackass for seven year olds"

Marty Putz is infectious and fun, cheeky and charming, and children can't get enough of him. Full of audience participation, you'd better warm up your vocal chords and stretch your throwing arm.

Experience between 30-60 minutes of mayhem, or up to two 30 minute shows, and he will have you hurling, ducking, screaming, laughing…and most fun of all, you'll be doing it as a family.

PARENTAL WARNING: You yourself may act like a 10 year old!

Putz’s comedy style is rare & zany. His infectious enthusiasm creates an appeal for an audience of all ages. It is impossible to be bored at a Putz show. A ‘jackass for seven year olds; the props and gags get bigger and louder with every segment and the audience is on the edge of their seats for a finale that should not be missed!

A rarity to be treasured!

Marty Putz’s show is brilliant, hilarious, silly and stupid! The bottom line is Putz should be experienced at least once.

School holidays, Melbourne Comedy Festival, A show just for kids that adults will love too. What's not to like?