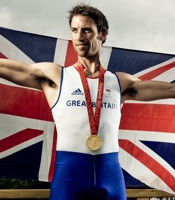 Mark Hunter is a double Olympic medallist, winning a gold medal in Beijing and a silver in London.

Mark's rowing career started at the age of 14 at the Poplar Blackwall & District Rowing Club where, having been introduced to the sport by his father, his dream of representing his country was born and his desire to achieve Olympic glory stirred.

He quickly progressed through the GB rowing ranks, representing his country in the World Junior Championships in 1995 and 1996 before going on to achieve success at the U23 World Rowing Championships from 1997 to 2000.

In 2001 Mark Hunter made the important decision to change class and race as a lightweight, and he has never looked back.

Success in the men's four in 2004 during the World Cup series was followed by being appointed captain of the prestigious Leander Club in 2005 and a win in the double scull in 2006 World Cup. Then, in 2008, a year in which he and Zac Purchase were the only unbeaten crew in world rowing, he confirmed his status as one of the leading rowers in his class by winning an Olympic gold medal in emphatic style.

Following his triumph in China, Mark took a year away from competitive rowing and spent time coaching at UCLA. Watching his athletes compete reminded Mark why he loved training and competing so much, and he returned to the UK with his eyes firmly on winning back his place in the boat.

In 2010 and 2011, confirming that they were back at the top of their game, Mark and Zac won consecutive World Championships in impressive style.

Mark and Zac's final race in London 2012 was one of the most gripping of the Olympic regatta and their post-race interview captured the hearts of the nation and they have been held up as examples of the Olympic spirit.

An East London local and lifelong West Ham fan, Mark Hunter is a Freeman of the River Thames and has a regular column in London's Evening Standard. He was supported by British Airways, BMW, Capita Symonds and Anglian Windows on his journey to London 2012.

Mark Hunter MBE is a warm, honest and articulate motivational speaker who brings with him a story of success and, more importantly, an awareness of what it takes to achieve. Mark offers his account of his career and achievements with a humour that contrasts sharply with his vivid recollections of the moments when he wondered if he could, or should, continue chasing his dream.

What kept him going? Who helped along the way and how? How did it feel to finally experience the sweet taste of success? What makes him continue to train and how does he maintain focus going forwards?

Mark answers these questions, and many more, with ease and charm, helping audiences learn from his experiences and take inspiration from them.

Mark’s natural ease and rapport with an audience mean that he is as happy talking to schoolchildren or rowing club audiences as he is delivering a keynote speech to senior management figures.

Listening to Mark was totally inspiring. Our boat will go faster as a result!!

I've met a few inspirational speakers over the years but Mark has set a new benchmark. A compelling story delivered without notes that took us on his journey through initial crushing defeat, that 4 years later became Olympic glory. The key point for me was the number of elements that Mark drew out to underline the relevance to life in business; 2 months on I'm still telling a number of people every week about the impact his talk had on me. Our boat will continue to go faster on the back of it.

We invited Mark to talk to a group of fifty of our key clients during Henley week. Mark's contribution to our day was absolutely first class. He is a very capable public speaker and his presentation captivated our guests who were able to listen to a World class athlete detailing the level of commitment and teamwork that it takes to achieve and sustain success in a highly competitive environment. One of our guests described Mark's talk as being 'truly inspirational'. Mark is very personable and was comfortable chatting with our guests on a one to one basis. I am pleased to be able to recommend Mark to you.

Mark responded well to our brief, tailoring his speech to consolidate and expand on the themes of our day. This combined with his Q&A session led to some great anecdotes and a natural engagement with the audience with some very positive feedback afterwards. Highly Recommended.

How to book Mark Hunter MBE for your event