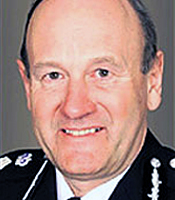 John Stevens is recognised as the most successful Commissioner of the Metropolitan Police in modern times. By the time he left the service in 2005, officer numbers had passed 30,000, morale was high and the Met had earned respect from all sections of the community. After stepping down as Commissioner, Lord Stevens completed the inquiry into the deaths of Diana, Princess of Wales and Dodi Fayed. He also chaired Interpol's Strategy Advisory Panel and David Cameron's policy group on border policing - and acted as international security advisor to Prime Minister Gordon Brown.

Lord John Stevens takes a hands-on approach to leadership. He believes it means having the ability and courage to enthuse others and inspire them to follow. Speaking to conference audiences from a wealth of personal experience, he sums up the leader's responsibilities as "delivery, performance, keeping promises and building confidence”.

On risk and security, his approach is characteristically pragmatic. Whether the threat is from terrorism or fraud, he advocates thorough risk assessment rather than allowing a culture of risk aversion to take root. Risks must be identified, evaluated, controlled and monitored. Lord Stevens is a board member of Travelex, BAA, Quest and LGC - the leading provider of chemical, biochemical and forensic analysis. After investigating alleged transfer irregularities on behalf of the Football Association, he has also been asked to look into horse-doping in Olympic show jumping and 'leaks' in Formula One.

He went down a storm. We saw his messages impact on the way delegates approached their exercises.

Clients often ask about purchasing books for giveaways and delegate packs. Below you’ll find a selection of products by Lord John Stevens QPM. Click the images to view on Amazon's website. For bulk orders, please speak with your Booking Agent.

How to book Lord John Stevens QPM for your event