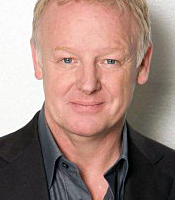 Les Dennis is acknowledged as one of Britain's most popular entertainers and as well as being well-known to TV viewers through top ITV game show Family Fortunes, he has a long list of theatre, film and television credits to his name.

His theatre work includes 'Amos Hart' in the hit musical Chicago and the leading role of 'Bill Snibson' in the award-winning Me And My Girl, both in the West End. He starred in the comedy Don't Dress For Dinner on tour, appeared in Skylight at the Water Mill Theatre, Newbury and James Robson's play Mr. Wonderful at the Chester Gateway Theatre.

He played 'Paul Sheldon' in the stage adaptation of Stephen King's Misery at the Oldham Coliseum Theatre, toured with the Alan Ayckbourn play Just Between Ourselves and appeared with Janet Suzman in the Finnish comedy, Cherished Disappointments In Love, which was staged for a season at London's Soho Theatre. He has just completed a national tour in Art with Christopher Cazenove and John Duttine.

Born and brought up in Liverpool, Les started in a showbusiness career immediately after leaving school. His early TV comedy series included Russ Abbot's Madhouse for both ITV and BBC and The Laughter Show and The Les Dennis Laughter Show for BBC TV.

He made his big screen debut in the film Intimate Relations with Julie Walters and Rupert Graves and appeared in the comedy feature film Large. His TV appearances also include BBC One's Merseybeat and Casualty and Channel 4's Brookside. He has guest presented on This Morning (ITV) and recently stood in for Terry Wogan in The Terry and Gaby Show (C5). He filmed a cameo role for the movie Fat Slags, appeared in the David Jason directed Quest II for ITV, and portrayed himself in an episode of Hotel Babylon, a stylish eight part drama for the BBC depicting the the sexy world of the luxury five-star hotel industry, which stars Tamzin Outhwaite and Max Beesley.

Les is available for meet and greet, appearances and after dinners talks.

How to book Les Dennis for your event