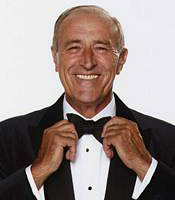 Len Goodman is known to millions as the supreme and generous judge of the BBC's headline reality show Strictly Come Dancing and the USA version of the show, Dancing With the Stars. His vast knowledge of Ballroom and Latin American dancing - gained over a lifetime of competing, judging and teaching all over the world - has made him one of the most well-respected characters in the dance fraternity.

Born in Bethnal Green in the East End of London, Len started his career relatively late in life. He actually wanted to be a footballer and it wasn't until the age of 20 that the ex-docker started dancing. Having retired after a successful competitive dancing career, which included winning Dual of the Giants, British Rising Stars, The British Exhibition Championships (four times) and the World Exhibition Championships in the early 1970's it was a natural progression for him to start up his own dance school in Kent.

As an Examiner for the National Association of Teachers of Dance, a Fellow of the Imperial Society of Teachers of Dance, Adjudicator for the World Dance Council, British Dance Council, Ballroom Dancers' Federation and a founder member of the International Dance Sport Judges and Trainers Association, what Len doesn't know about dance isn't worth knowing.

Len Goodman has received various awards in the UK, including a Life Achievement Award for his work in dance and a Carl Allen Award (the equivalent of the Oscars of the dance world). His work on Strictly Come Dancing and Dancing With the Stars has ensured nominations and awards aplenty and in 2006-07 he was nominated for a Primetime Emmy Award for his work on Dancing with the Stars.

Len Goodman has made numerous TV and radio appearances in the UK but one of his greatest was surely winning Celebrity Weakest Link. He has also appears on the Royal Variety Show, BBC Breakfast, GMTV, Lorraine Kelly show, The Wright Stuff, Ready Steady Cook, Would I Lie to You? What Are you Like?, Alan Titmarsh Show, Richard and Judy and The Jonathan Ross Show.

Millions of people have been entertained on BBC2's It Takes Two, where Len has tried, without much success, to teach the presenter Claudia Winkleman to dance. In America Len has appears on Entertainment Tonight, E Entertain, Good Morning America and Larry King Live.

Len has also released an instructional DVD, Dance with Len Goodman and released his autobiography, Better Late than Never.

Clients often ask about purchasing books for giveaways and delegate packs. Below you’ll find a selection of products by Len Goodman. Click the images to view on Amazon's website. For bulk orders, please speak with your Booking Agent.

How to book Len Goodman for your event