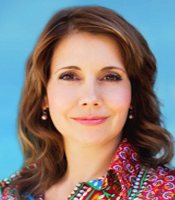 Kristiane Backer has been involved in the field of Arts, Culture and Music since she began her professional life and now works as a Fine Art consultant based in London.

Her focus is on Modern and Impressionist paintings as well as Post War and some Contemporary Art. Kristiane enjoys discovering talents and help giving them a platform. She takes a personal interest in Islamic and Eastern art and has curated a major Art exhibition by the Egyptian Calligraphy Artist, Ahmed Moustafa, in Sarajevo.

Kristiane is engaged in several cultural projects, as well as inter-cultural dialogue. She is active in fund raising for charities and hosts galas, conferences and corporate events internationally.

In 2012 Kristiane published her best-selling memoir ‘From MTV to Mecca’ in the UK. She gave extensive book talks in the UK and abroad. The original book was published in German; Dutch, Indonesian, Malaysian, Urdu and Arabic editions are available as well.

Her background is a pan-European career in TV and public speaking.

At the age of 24 Kristiane became one of the leading presenters on MTV Europe where she interviewed many major artists and musicians of her time. She created her own youth show in Germany and presented a daily guide to culture and entertainment, ‘The Ticket NBC’ on NBC Europe. She presented a monthly travel show for Travel Channel in Germany, and an interfaith show for Ebru TV.

Kristiane was awarded Germany’s most prestigious TV award, the ‘Golden Camera’, for her television work.

She hosts galas, award ceremonies, conferences and corporate events throughout Europe, the UK and is a regular guest speaker at international events.

For keynote speaking her specialist topics include:
Islam and the West
• Women, Media and Islam
• Journey to Islam

Clients often ask about purchasing books for giveaways and delegate packs. Below you’ll find a selection of products by Kristiane Backer. Click the images to view on Amazon's website. For bulk orders, please speak with your Booking Agent.

How to book Kristiane Backer for your event