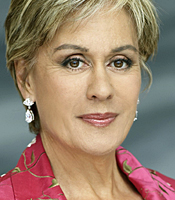 Kiri Te Kanawa gained legendary status almost overnight after her sensational debut as the Countess in Le Nozze di Figaro at the Royal Opera House, Covent Garden in 1971. From then, she moved rapidly into the front rank of international opera, and has become one of the most famous sopranos in the world.

In the genre of opera, Kiri Te Kanawa is a familiar figure in the leading opera houses of the world - Covent Garden, the Metropolitan, the Chicago Lyric Opera, Paris Opera, Sydney Opera House, the Vienna State, La Scala, San Francisco, Munich and Cologne.

Kiri Te Kanawa was born in New Zealand, and carries the exotic blood of native Maori aristocracy. Created a Dame Commander of the British Empire in 1982, Kiri Te Kanawa has been conferred with honorary degrees from the Universities in Cambridge, Oxford, Dundee, Durham, Nottingham, Sunderland, Warwick, Auckland, Waikato and Chicago. She is also an honorary fellow of Somerville College,Oxford, and Wolfson College, Cambridge, and was invested with the Order of Australia in 1990. In the 1995 Queen's Birthday Honours List, she was awarded the prestigious Order of New Zealand. Kiri is an Honorary Member of the Royal Academy of Music.

After twenty five years at the forefront of musical life, in 1994 Kiri celebrated her 50th birthday, culminating in a spectacular Birthday Concert at the Royal Albert Hall, London.

How to book Kiri Te Kanawa for your event