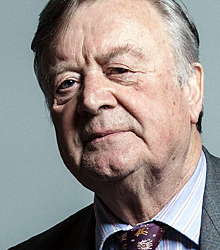 The Rt. Honourable Kenneth Clarke QC MP has been described by the media as a 'Big Beast' of British politics, having served in the Cabinet as Chancellor of the Exchequer, Home Secretary, Lord Chancellor and Justice Secretary, Education Secretary, Health Secretary and minister without portfolio.

Clarke was elected Conservative MP for Rushcliffe at the 1970 General Election, and after a succession of appointments in and out of government, he was made Minister for Health in March 1982. He is a barrister-at-law, having been called to the Bar by Gray's Inn in 1963 and became QC in l980. In the New Year Honours List of 1984 he was appointed a Privy Counsellor.

In September 1985, Kenneth Clarke was appointed to the Cabinet as Paymaster General and Minister for Employment. He was then appointed Chancellor of the Duchy of Lancaster and Minister for Trade and Industry following the June 1987 General Election.

Ken Clarke is one of only five ministers to serve throughout the whole 18 years of the Governments of Margaret Thatcher and John Major, which represents the longest uninterrupted Ministerial service in Britain since Lord Palmerston in the early 19th century. He returned to government in 2010 and his total time as a minister is the fifth-longest in the modern era; having spent over 20 years serving under Prime Ministers Margaret Thatcher, John Major and David Cameron.

In 2016 he published his memoirs, “Kind of Blue: A Political Memoir”.

When his busy schedule allows, Kenneth Clarke is a popular keynote conference speaker and usually talks on matters relating to British, European and global politics or the economy.

Ken Clarke delivered a very entertaining and insightful talk regarding the current political climate to a room full of toy industry professionals... and was requested by many to have him return to speak at our event again next year. The booking process with NMP Live was very simple and easy – we would definitely book guest speakers with them again for our events in the future.

Clients often ask about purchasing books for giveaways and delegate packs. Below you’ll find a selection of products by Rt Hon Kenneth Clarke QC. Click the images to view on Amazon's website. For bulk orders, please speak with your Booking Agent.

How to book Rt Hon Kenneth Clarke QC for your event