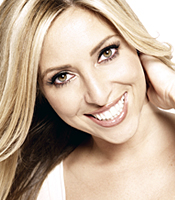 A finalist of ‘The Apprentice' in 2009 Kate Walsh impressed Lord Sugar right to the end and was consistently cool under fire. Kate's business career was set in motion at Marston's Brewery in Burton-on-Trent, where she joined as a graduate trainee before working in marketing and operational roles acting and as a business consultant for 45 pubs and restaurants.

Kate continued to ascend the corporate ladder moving to work in an account management/business development role for Starbucks.

Self-described as positive, tenacious, and confident, Kate Walsh established herself as a talented, intelligent, and proficient individual. Her highly motivated personality and sharp work ethic led her to success on series five of The Apprentice.

Kate was a joint anchor from September 2009 when she took to the screen alongside Melinda Messenger and Ian Wright on ‘Live From Studio Five'. She remained the longest serving and only original presenter until joining OK!TV in 2010, presenting alongside Matt Johnson. Kate Walsh has successfully worked with a range of presenters holding her own amongst some big personalities and studio guests.

Also taking on reporting duties for the show Kate has won a number of A list celebrities over with her down to earth interviewing style including: Leonardo Dicaprio, Drew Barrymore, Sarah Jessica Parker and Jennifer Lopez to name but a few.

Other TV credits include business/fashion slots for GMTV, guest appearances on Market Kitchen, BBC3 comedy panel show ‘The King is Dead' and a one-off ‘SATC2 Movie Special' episode filmed on location in New York with red carpet interviews in the UK.

Born in Cannock, Staffordshire, Kate Walsh was raised in the West Midlands. Her mother, a dinner lady and teaching assistant, and father, a mine worker-turned-mechanic, divorced when Kate was 16. A straight ‘A' student, she furthered her education with the completion of a first-class honours degree in Psychology and Management from Aston Business School.

How to book Kate Walsh for your event