One of America's finest stand-up comedians, impressionists and comedy actors 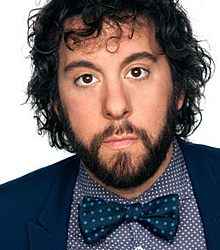 One of America's finest stand-up comedians and comedy actors, Jonathan Kite came to the public's attention on both sides of the Atlantic for making audiences laugh on E4 / CBS's 2 Broke Girls, playing the loveable, slightly sex-crazed Ukrainian cook Oleg.

However, with his roots in stand-up comedy, Jonathan is also an expert mimic and is quickly becoming known for the wide array of characters that he has brought to life on television and in film, boasting more than 50 impressions and dialects that include Vince Vaughn, Tom Hanks, Seth Rogen, Liam Neeson and Robert Downey Jr. to name just a few.

A Chicago Native, Jonathan Kite has been performing since birth. Growing up in the Windy City, he was immersed in the comedy world, as it's a huge part of the Chicago theatre scene. Being around this subculture and gravitating to it at such a young age helped make Jonathan a fan of improv and sketch.

He obtained a Bachelor of Fine Arts in Theatre Acting from the University of Illinois, while in conjunction studying with Second City, one of the worldʼs premier comedy schools, and participating in numerous improv groups. In 2003 he made the move to Los Angeles to pursue a career in acting.

The first major project he undertook upon arrival in Los Angeles was a BEE MOVIE promo with Jerry Seinfeld. Up until that point, Jonathan had been booking a plethora of TV commercials as well as independent shorts and films, but the promo for the film helped him get into the theatrical world and would ultimately help him land his most notable projects to date.

In 2009, he secured the pilot episode of FOXʼs Raising Hope where he played opposite Bijou Phillips. He also wrote, produced, and starred in his own sketch comedy TV pilot called The Skokie-Jo and Shappy Show. In 2010 Jonathan went on to be cast on a new series for FOX called In the Flow with Affion Crockett, produced by Jamie Foxx, and also became the face of Muscle Milk — which showcased some of his best characters and infiltrated TV screens and radio nationwide.

Jonathan Kite is an avid writer and is finishing his first full length feature film, The Walk On, which he will also star in and produce. He is an active supporter of various autism and breast cancer charities. He resides in Los Angeles, California.

How to book Jonathan Kite for your event