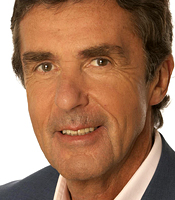 John Stapleton is a seasoned broadcaster with over 40 years experience in newspapers and television. Presenting GMTV for 12 years, John was made the Royal Television Society News Presenter of the Year in 2004 for his work on GMTV's News Hour. Prior to GMTV, John and his wife, Lynn Faulds Wood, presented the highly popular Watchdog programme for the BBC for eight years during which time John also anchored ITV's daily discussion programme The Time The Place.

John's media career began working on local newspapers in North West England, before becoming a staff reporter on the Daily Sketch in Fleet Street. His first job in television was as a researcher and script writer on This is Your Life presented by the Eamonn Andrews at the time.

He subsequently worked as a reporter on the Thames TV regional news magazine show Today from 1971 until 1975. He joined the BBC Nationwide programme in 1975 as a reporter, and then became one of the main presenters from 1977 until 1980. While on Nationwide he also carried out major investigations into council corruption in South Wales and protection rackets in Northern Ireland. He also compered a number of one-off light entertainment shows for the BBC, including the Miss United Kingdom beauty pageant.

From 1980 until 1983, John Stapleton was a correspondent on both the BBC Panorama programme and BBC Newsnight reporting from trouble spots such as the Middle East and El Salvador before working for three months as Newsnight's correspondent in Argentina during the Falklands war. From 1983 to 1985, he worked at TV-am as a reporter and as a presenter of Good Morning Britain. From 1986 until 1993, he presented the BBC1 peak time consumer programme Watchdog alongside his wife Lynn Faulds Wood, as well as the live morning talk show The Time, The Place from 1993 to 1998.

In 1994, John Stapleton joined the ITV breakfast programme GMTV as a presenter of the Newshour. In 1997, he, along with Sir Trevor McDonald, presented the live and controversial Monarchy debate for ITV in front of three thousand people at Birmingham's National Exhibition Centre. He also covered the war in Kosovo when he was based on the Albanian border covering the refugee crisis. This was followed by him anchoring four American elections, the Tsunami in South East Asia, Pope John Paul's funeral in Rome and Hurricane Katrina in New Orleans.

In 2004, he was made the Royal Television Society's News Presenter of the Year - largely for his work on GMTV covering the 2003 war in Iraq and interviews he conducted with political party leaders including the then Prime Minister Tony Blair. He returned to Iraq to front two special programmes for GMTV commemorating the fifth anniversary of the war He is also a reporter for the prime time ITV1 Tonight programme. John has, over the years, also presented many regional news and current affairs programmes including the BBC's London Plus, Facing South for Meridian, and Central Weekend Live for Central TV.

John Stapleton has interviewed every Prime Minister since James Callaghan and is the only presenter to have worked for all three major ITV breakfast shows: TV-am, GMTV and now Daybreak.

How to book John Stapleton for your event