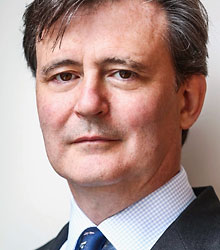 As editor-in-chief, John oversees editorial content across all Bloomberg platforms, including its news, newsletters, magazines, opinion, television, radio and digital properties, as well as its research services, including Bloomberg Intelligence and Bloomberg Brief.

Prior to joining Bloomberg in February 2015, he was Editor-in-Chief of The Economist, the world’s leading business and current affairs weekly, where he led the newspaper into the digital age while expanding its readership and enhancing its reputation. During his tenure, weekly print circulation was about 1.5 million worldwide, with 100,000 digital subscribers. Before that he edited the US section of the newspaper (1999 - 2006) and ran the New York Bureau for two years.

After studying history at Magdalen College, Oxford, John Micklethwait worked as a banker at Chase Manhattan. He joined The Economist in 1987 as a finance correspondent. He set up The Economist’s Los Angeles office, where he worked from 1990-1993 and served as its media correspondent, before being named Editor-in-Chief in 2006.

Since then, he’s edited the business section of the magazine, run the New York bureau, and, most recently, edited the United States section. He has covered business and politics from the United States, Latin America, Continental Europe, Southern Africa and most of Asia, and he’s written surveys for The Economist on California, business in Asia, Argentina, Silicon Valley, the United States, and the entertainment industry.

John Micklethwait is a frequent broadcaster and has appeared on CNN, ABC News, BBC and NPR. He is the co-author of The Witch Doctors, A Future Perfect: the Challenge and Hidden Promise of Globalisation and The Company: A Short History of a Revolutionary Idea and The Right Nation, a study of conservatism in America, with Adrian Wooldridge, also an Economist journalist.

John is a winner of the Wincott Award, Britain's leading prize for financial journalism and in 1990 was Voted Young Financial Journalist of the Year by the Harold Wincott Foundation. He was named a Commander of the Order of the British Empire (CBE) during the Queen’s Birthday Honours list.

Clients often ask about purchasing books for giveaways and delegate packs. Below you’ll find a selection of products by John Micklethwait CBE. Click the images to view on Amazon's website. For bulk orders, please speak with your Booking Agent.

How to book John Micklethwait CBE for your event