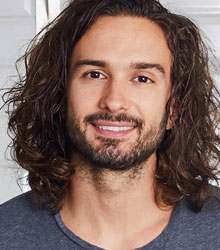 Taking the world of fitness and nutrition by storm, Joe Wicks AKA The Body Coach, is a man on a mission to rescue people from the awful dieting industry.

Sick and tired of people struggling on low calorie diets and meal replacement shakes, he created a food plan to educate people and give them the knowledge they need to get a lean, healthy strong body without going hungry.

Then, during the 2020 Coronavirus pandemic, Joe helped to keep everyone’s spirits high by becoming the 'nation's PE teacher' when we were in lockdown. Every weekday, he delivered remote 'PE' sessions via YouTube titled “PE With Joe” to children and adults alike. This live stream had a wide impact and was viewed by over a million users worldwide.

Through his daily live workouts, Joe has raised over £550,000 for the NHS as well as breaking a Guinness World Record after the second of his 'PE' classes was watched live by over 955,000 people.

With the third best-selling cookbook of all time, over three million books sold and two Channel 4 series', Joe Wicks, The Body Coach, has taken over the world of fitness and nutrition.

Joe's debut book 'Lean in 15’, which was released in 2015, went straight to the top of the charts and holds the record for the biggest first week sales of a debut cookbook of all time. Joe now has seven best-selling books - his books have been translated into 18 languages and his first book alone sold over one million copies in its first year.

Born in Epsom, Surrey, Joe grew up on a council estate with his parents and two brothers, attended Blenheim High School and then NESCOT (North East Surrey College of Technology) before starting his career as a teaching assistant, having gained a degree in sports science at St Mary's University in Twickenham.

Realising it was not his ideal job, Joe became a personal trainer for the next five years and began to gain traction for his fitness and nutrition related content on social media. In 2014, he began posting videos to Instagram relating to workouts and nutrition advice and amassed over 3 million followers.

He was awarded Member of the Order of the British Empire (MBE) in October 2020 for services to fitness and charity.

Clients often ask about purchasing books for giveaways and delegate packs. Below you’ll find a selection of products by Joe Wicks MBE. Click the images to view on Amazon's website. For bulk orders, please speak with your Booking Agent.

How to book Joe Wicks MBE for your event