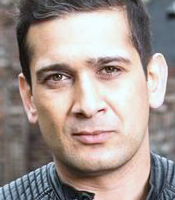 Jimi Mistry was born in Scarborough, North Yorkshire to an Indian Hindu father and a Irish Roman Catholic mother. After growing up in Manchester and studying at the Birmingham School of Speech and Drama, he moved to London to become an actor.

Jimi made his screen debut in 1996 with a non-speaking role in Kenneth Branagh's adaptation of Hamlet. On the stage, he was cast as the rebellious son Tariq Khan in the semi-autobiographical play East Is East by Ayub Khan-Din. After a long run at the Royal Court Theater, the story was adapted for film and Jimi Mistry reprised his role for the movie, which was released in the UK in 1998.

It was in 1999 however, where he gained considerable exposure as doctor Dr Fred Fonseca in BBC soap EastEnders. In 2000, Mistry played small-time crook Eddie in David Kane's comedy Born Romantic, which was followed by a small role in the drama My Kingdom. He then went to Trinidad to make the Merchant-Ivory costume drama The Mystic Masseur. In his first US film, The Guru, Jimi Mistry played Ramu Gupta, an Indian dance teacher who moves to America to be a star, but ends up with a career using his unique sensual abilities to please women. Also starring Heather Graham and Marisa Tomei, the film incorporated elements of Bollywood productions with standard romantic comedies.

Jimi Mistry's next starring role was young, gay, Muslim Alim in the romantic comedy Touch of Pink, which premiered at the Sundance Film Festival. Later projects included the war romance Partition, the action comedy Dead Fish, and the comedy drama You Don't Have to Say You Love Me.

Jimi Mistry has also produced/written and starred in a music documentary about Ibiza entitled And The Beat Goes On, exploring the history of the island, the birth of House Music and the art of the DJ. DJs involved in the film include Paul Oakenfold, Danny Rampling, Nicky Holloway, David Guetta, Brandon Block, Alfredo, Pete Tong and Danny Tenaglia. He regularly DJs in clubs across UK and Europe.

Jimi competed in the 2010 series of BBC's Strictly Come Dancing, partnered by Flavia Cacace and in 2013 the couple announced they were to get married.

How to book Jimi Mistry for your event