Internationally acclaimed as one of live comedy's masters 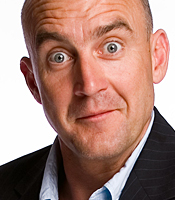 Book Jimeoin
add to shortlist
About

Internationally acclaimed as one of live comedy's masters Jimeoin is one of the hottest stand-ups of this generation. A prolific writer with an exceptional audience rapport, he is known and loved for his brilliantly funny wit and charming observations on the absurdities of every-day life.

Jimeoin's regular appearances at most of the world's major Comedy Festivals and his massive Australasian and Irish tours attract sell-out audiences. His extensive international work has also received great acclaim, he regularly performs seasons in London, tours throughout the UK and Ireland and is a veteran of Montreal's Just For Laughs Festival.

His non-stop tours regularly take him throughout the vast outback regions of Australia as well as playing the major cities across the land. In 2005-6 Jimeoin became the first comedian to tour totally "over the top" of the country, playing a mix of hotels, theatres, swimming pools, cattle ranches and anywhere that looked a bit interesting. Between 2007-8 these adventures were filmed for a TV series on BBC Northern Ireland called "JIMEOIN DOWN UNDER". He performed additional sell-out tours in Ireland, shows in Paris and several massive seasons at the Edinburgh Fringe, as well as annual sell-out seasons in London's West End.

Jimeoin's massive seasons at the annual Edinburgh Festival Fringe regularly smash box-office records and are huge hits with the public and critics alike.

A familiar face on Australian television, Jimeoin has appeared on all the nation's top variety and comedy programs including GMA, Rove (live), The Panel, Thank God You're Here, Full Frontal, Bligh, Good News Week, The Midday Show and Tonight Live.

The three series of his own hit show "Jimeoin" (Seven Network) consistently won the ratings when they were transmitted in 1994-1995.

Jimeoin has also made regular guest appearances on top-rating international television programs including Des O'Connor; 2008's ITV Christmas special in the UK and several appearances on Late Night with Conan O'Brien in the US (with a viewing audience of over 13 million).

His hour-long "Tea Towel Tour" of Ireland documentary (for Network Ten, Australia in 2001) was a quirky, self-styled travel special, inspired by constant touring and a love of his native land. The same year he also hosted two one-hour documentaries showcasing Montreal's "Just for Laughs" comedy Festival.

In 2008 Jimeoin co-produced a 6-part comedy series for BBC N.Ireland following his epic 2007-8 tour across the far north top of Australia called "JIMEOIN DOWN UNDER". A combination of comedy travelogue and stand-up show, this series was repeated almost immediately due to popular demand.

Clients often ask about purchasing books for giveaways and delegate packs. Below you’ll find a selection of products by Jimeoin. Click the images to view on Amazon's website. For bulk orders, please speak with your Booking Agent.

How to book Jimeoin for your event