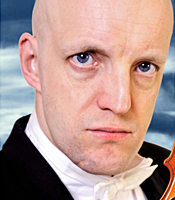 Jim Tavare has performed three times at The Royal Variety Command Performance. At special request, he performed at HRH Prince Charles' private Christmas party. He later appeared in front of Her Majesty The Queen and thirteen Crowned Heads Of State at a Gala held at Highgrove in aid of the King of Greece Birthday. Jim is renowned for his proud title of being Prince Charles' favourite comedian.

This was followed by his own comedy sketch series The Jim Tavaré Show. He co-wrote the 13-part series with Ricky Gervais who also starred.

In 2001, Steve Coogans' production company invited Jim to be part of The Sketch Show team for ITV in the UK. The first series packed with over 30 sketches went on to win a prestigious BAFTA Award. The format of the show was remade in 7 different countries including Germany, Israel, Indonesia and the USA. There followed a major acting role as Tom the Innkeeper in 'Harry Potter and the Prisoner of Azkaban'.

In the USA, Jim featured in Season 6 of NBC's Last Comic Standing where he was voted the 4th finalist. This made him the first ever International act to make it through to the final show. He went on to perform a 63 date US national tour with the other 4 finalists. He has since established a film career in the USA.

Jim Tavare is a highly sought after act on the corporate circuit.

What a refreshing change a comedian who gives a wonderfully funny performance and keeps the whole room captivated for more than the first joke! A fantastic performance.

I'm delighted to say that the event was a huge success overall and that the gala dinner in particular received rave reviews. Jim Tavare was a star and produced a superb performance which had the delegates crying with laughter through most of his show... We greatly enjoyed working with Jim. He was very easy to work with and he was always calm and professional - even when British Airways managed to forget to load his double bass on the plane and it had to be flown out on the next flight - just in time for the show!

Jim Tavare met our requirements very well...[he] was very well received by the audience and quickly developed an empathy with them. Very entertaining.

How to book Jim Tavare for your event