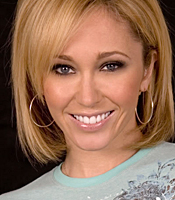 Jenny Frost first entered the music scene as a member of girl band called Precious, which initially found fame by winning the right to represent the UK at the Eurovision Song Contest in 1999, with the song "Say It Again". This success propelled Jenny and the band to a big hit in the UK charts.

After subsequent releases, Precious enjoyed modest success but Jenny decided to move on and in 2001 replaced Kerry Katona in the Pop Group Atomic Kitten. Shortly after this, the Kittens had their first UK No 1 single, "Whole Again" along with their album, Right Now. They went on to gain further number one hits with covers of The Bangles' Eternal Flame and Blondie's The Tide is High.

How to book Jenny Frost for your event