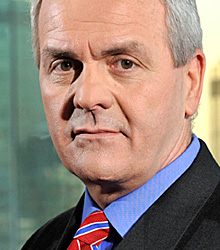 Jeff Randall was appointed Editor-At-Large of the Daily Telegraph in November 2005, after nearly five years as the BBC's Business Editor.

He writes a twice-weekly column for the newspaper, as well as continuing to present "Weekend Business", a radio show on BBC Five Live.

Jeff presented Jeff Randall Live on Sky News. The show takes a look at the big business stories of the day, with regular exclusive guests and hard hitting interviews. The show is a must view for anyone working in the worlds of business and finance.

How to book Jeff Randall for your event