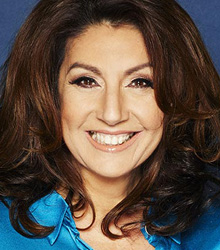 Born on 4 April 1963 in Wakefield, West Yorkshire, to parents Peter and Jean, Jane McDonald was brought up by her working class family and spent her early years listening to the radio, her favourite past time.

She started school in 1968, where she attended Eastmoor Infant School. It wasn't until 1971 that her musical career began. Inspired and encouraged by her music and form teacher, Mrs Brearley of St Michael's Junior and Middle School, music began to play a major part in Jane's life.

In 1985, encouraged by her parents, who bought her equipment, Jane's singing career took off. With her Dad acting as Roadie, Jane toured the pubs and clubs performing all over the country.

With the sudden death of Jane's father and her inability to cope on the club circuit without him, Jane ran away to sea in 1989. Life on the ocean waves was very different to life on the club scene. Jane joined the cast as a production singer. It was while working on the 'Century' during 1995 that she met Henrik.

Preparing herself for life with Henrik, Jane retired from her singing career - but not for long! Her big break came in late 1995/96 when she was asked to perform as top of the bill on the cruise ship 'The Galaxy'. Not being able to resist a challenge, Jane accepted. It just so happened that BBC Television were making a documentary on board the Galaxy. Jane immediately came to their attention and became one of the main focal points of the BBC1 programme, 'The Cruise'. The rest as they say, is history.

How to book Jane McDonald for your event