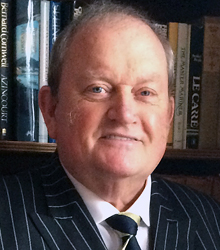 James draws on a lifetime of career experiences in his after dinner and keynote speeches, where he exposes the failings in our immigration system, discusses the consequences of Brexit, and the dilemmas surrounding the treatment of Migrants.

Finding humour in obscure situations he balances delivers an entertaining speech on such serious subject matter, with much to amuse, but also much to consider and contemplate.

In 2016 his book, The Making of an Immigration Judge, was published.

James Hanratty is an experienced and amusing public speaker who has spoken at Literary Festivals, Livery Companies in The City and Clubs and Associations all over the country.

Thank you for entertaining us so amusingly at our dinner at RORC. I and everyone really enjoyed your very entertaining speech and the serious bits were very thought provoking. Several people mentioned to me that that evening was the best dinner at Cowes they could remember which I think is down to your speech.

Clients often ask about purchasing books for giveaways and delegate packs. Below you’ll find a selection of products by James Hanratty. Click the images to view on Amazon's website. For bulk orders, please speak with your Booking Agent.

How to book James Hanratty for your event