Former Chairman and CEO of GE 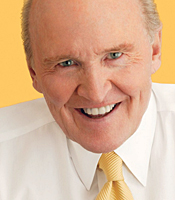 He began his career with the General Electric Company in 1960 and in 1981 at just 45 years old became the company's youngest Chairman & CEO. In his first year he introduced the strategy of "Fix it. Sell it. Close it." Welch's nickname, 'Neutron Jack', is a result of his management style: informal but demanding. During his 20 years as CEO of General Electric, he transformed the company from a bureaucratic behemoth to a dynamic and revered powerhouse. During his tenure, GE market value grew from $13 billion to $400 billion. In the process, Welch's management innovations have made him the most influential CEO of his era.

Upon his retirement from GE in 2001, Mr. Welch wrote his #1 New York Times and international best-selling autobiography, 'JACK: Straight From The Gut'. He has also spent much of his time travelling around the world, speaking to people at every level of an organisation, answering their questions on dozens of wide-ranging topics. These sessions were the inspiration for his new best-selling book, Winning.

In 2000 he was named Manager of the Century by Fortune magazine. In 2005, he was voted Most Admired CEO of the past 20 years by Chief Executive magazine readers and the World's Greatest Leader today in a Fast Company magazine survey.

"Perhaps the greatest single gift my mother gave me was self-confidence. I grew up in a middle class family with a speech impediment, a stammer that wouldn't go away. Sometimes it led to comical or embarrassing, incidents. In college, I often ordered a tuna fish on white toast. Inevitably, the waitress would return with not one but a pair of sandwiches, having heard my order as 'tu-tuna sandwiches'."

"My mother served up the perfect excuse for my stuttering. 'It's because you're so smart,' she would tell me. 'No one's tongue could keep up with a brain like yours.' For years, in fact, I never worried about my stammer. I believed what she told me: that my mind worked faster than my mouth. She convinced me that I could be anyone I wanted to be."

Mr. Welch is currently the head of Jack Welch, LLC, where he serves as an advisor to a small group of Fortune 500 business CEOs and speaks to business people and students around the world.

Clients often ask about purchasing books for giveaways and delegate packs. Below you’ll find a selection of products by Jack Welch. Click the images to view on Amazon's website. For bulk orders, please speak with your Booking Agent.

How to book Jack Welch for your event